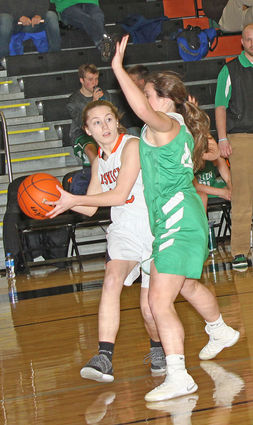 The Ipswich Lady Tigers edged Philip 63-60 in overtime of a classic hosted by Highmore-Harrold last Saturday afternoon. Things had gone` a little easier for Ipswich against Miller, though, with a 50-36 homecourt win two nights earlier.

Against Philip, Halle Heinz got a layup to give IHS a 62-60 lead and Kamryn Heinz then hit a free throw for that 63-60 edge, according to Coach Brian Hogie. He said that Abby Grabowska had netted a pair of free throws with under 10 seconds left in regulation to put the Lady Tigers up by one point. Philip then answered with an accurate free throw try to even things at 58, but missed its second attempt.

The contest was just that way! Philip had obtained a 16-14 first-quarter lead and Ipswich returned the favor with a two-point halftime advantage, 26-24. Then it was Philip's turn to shine with a 38-35 edge with a quarter to play.

Kamryn Heinz led all scorers with 28 points and included a trey and five free throws. Next was Halle Heinz with 22 points, including six treys and six of her team's 16 assists. Abby Grabowska became a third double-figure scorer with 10 points. Sydney Loken added two points and Aleah Steger, a free throw.

Meanwhile, Copper Lurz led Philip with 16 points and Cappie West was next with 12 counters.

Ipswich finished 24-67 in overall floor shot attempts and included those seven treys. Philip also featured seven treys among its 23 successful floor shots and was 7-12 at the line.

Ipswich enjoyed a 39-36 rebounding edge, led by Kamryn Heinz with 11 retrieves for a double-double. Grabowska also earned a double-double with 10 rebounds to go along with her 10 points. The Lady Tigers sustained 12 turnovers, while helping force 27 miscues. Halle Heinz obtained five of her team's 18 steals.

Against Miller, Ipswich had built up a 12-2 first-quarter lead, capped by an Abby Grabowska basket. Then it was Ipswich 16, Miller 12 at intermission, as the visitors began chipping away at their early deficit. But Ipswich narrowly won the third-quarter 8-0. Yes, that's right. The Lady Tigers blanked the Rustlers in that quarter for a 28-22 lead, entering the crucial final quarter, also won by the hosts 22-14.

Ipswich was led by Kamryn Heinz with 15 points and she included two treys. Halle Heinz added 14 points with a trey. Steger finished with eight points, while Abby Grabowska was next with seven points and Sydney Loken scored six points. Ipswich made 20 floor shots, including those three treys and was 7-8 in free throw attempts.

The visitors were led by Abby Ketelhut with 10 points and five other Rustlers got into their scoring ledger. They included one trey in their field-goal total and were 8-13 at the line. Ipswich totaled 29 rebounds, led by Kamryn Heinz with 11 for a double-double and Miller recorded 32 rebounds. Ipswich committed 10 turnovers, exactly half of Miller's 20. Eleven of those were from Lady Tiger steals.

Ipswich plays Sully Buttes there on February 8 and will face Waverly-South Shore in Warner a day later. Ipswich will then host Highmore-Harrold on February 12 in the Tiger Den.