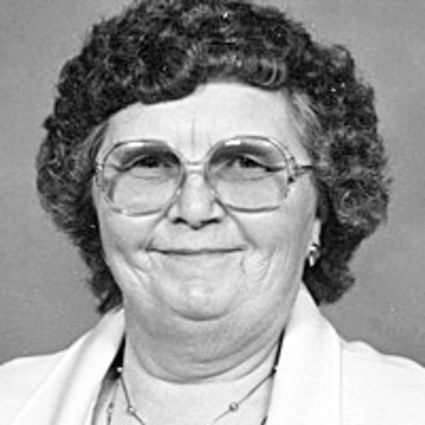 The funeral for Norma Schneider, 83, of Ipswich, was at 4 p.m. Monday, April 22, 2019 at Gramm Funeral Home, Ipswich. Pastor Mark Gullerud, of Zion Lutheran Church, led the worship service. Burial will be at a later date in Ipswich City Cemetery.

Norma was born on, April 1, 1936 at Roscoe, to Arthur and Bertha (Rosenau) Semmler. As a youngster the family moved to the Parkston area where she attended country school. The family moved to Ipswich when she was 15.

She married Derwood Schneider on June 7, 1953. They made their home near Mobridge, Hosmer and Parkston before settling in Ipswich in the 1960's. She worked at the Swanson Bakery and cooked at several restaurants. In the mid-1970's she began a career as a cook at the Ipswich Public School. Derwood died in 1984 and Norma stayed in Ipswich.

She continued to work in the school kitchen. While she enjoyed the staff, she really enjoyed the children and it was the children who enjoyed her fresh baked breads and cinnamon rolls. Multi generations of Ipswich students experienced the joy of Norma's talents. Although she retired after nearly 40 years of cooking, she still worked part-time at the school kitchen until the time of her death.

While Norma was a cook to many children, she was Mom to her own children. She enjoyed watching them in wrestling and horse shows. She once wrote that she hopes that they will remember her for her cooking and baking.

All of the time that Norma spent in schools inspired her to complete her GED, which she did in 1987.

Norma loved life and enjoyed a laugh. Perhaps being born on April Fool's Day gave her the sharp wit that she shared with many. She also loved to travel and she cherished bus trips she had taken with friends. She loved to watch the Minnesota Twins and listen to Alan Jackson. Norma was an avid Alan Jackson fan.

She was a member of Zion Lutheran Church and the American Legion Auxiliary.

Thankful for having shared in her life are her four boys, Terry (Jerri) Schneider of Aberdeen, Robert (Linda) Schneider of Midland, Tex., Mark Schneider of Faulkton and Jim (Janell) Schneider of Sioux Falls; grandchildren, Brandon, Gabrielle, Jasmine and Justin; and one brother, Clifford Semmler of Fairfield, Calif.

She was preceded in death by her parents; husband; grandson, Shawn; brother, Elmer; and one sister-in-law, Irma Semmler.