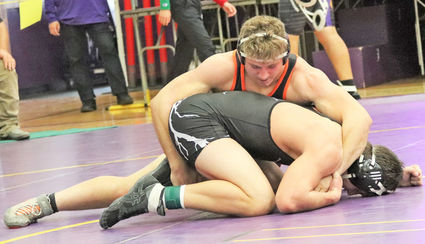 Carter Heinz in wrestling action at the Stanley County Invitational on Dec. 7 in Ft. Pierre.

The Ipswich Area (Ipswich/Leola/Bowdle) varsity wrestling season started out on a real positive note last Saturday in Ft. Pierre, as six of the nine Ipswich Area wrestlers in attendance there placed at the Stanley County Invitational, including one Champion.

Carter Heinz indeed led the team with his first-place finish at 195. The other five placing wrestlers all placed higher than their seeding position in the tournament. Denver Wolff placed third, Tanner Frickson fourth and Parker Gill fifth, while Marc Hofer and Darrel Yost brought home sixth-place metals. The team placed eighth out of 1...