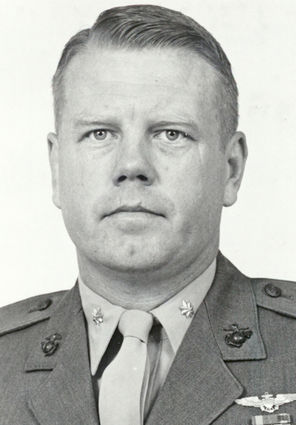 Kenneth LeRoy Holm was born at home on June 15, 1938 in Aberdeen. He graduated from Ipswich High School in 1956 and was recruited and offered a full scholarship to play football at SDSU. He graduated with a degree in Wildlife Conservation in 1960. He married Kathy Staver of Arispe, Iowa on May 27, 1963. They were married for 35 years, and had three children: Dana, Kenna, and David.

Ken joined the Marine Corps in 1961 and served for 21 years including two tours in Vietnam, flying 1171 combat missions. Ken was a Command Pilot with HMX1 Presidential Marine Helicopter Squadron, flying Presidents Nixon and Ford. He was inducted into the South Dakota Aviators Hall of Fame in 2001. After retirement from the Marine Corps, Ken started his second career serving the state of South Dakota Job Service for 20 years.

Ken was preceded in death by his parents, Carl and Irene Holm, and his brother, Darwin. He is survived by his oldest brother, DeWayne (Hazel); daughter Dana (Meredith) Wilson; daughter, Kenna (Lynn) Parker; and son, David (Karen) Holm; as well as 11 grandchildren.

Ken died in his sleep on January 15, 2020, in his home at West Hills Village. Funeral services will be held Friday, January 24th, 2020 at 11:00am at Fountain Springs Church West in Rapid City, with visitation one hour prior to the services at the church. Burial will follow at Black Hills National Cemetery with military honors at 1:30pm. All are welcome to attend.