IHS girls have a winning week 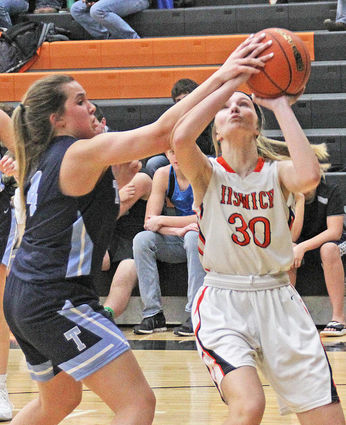 Katie Bierman (30) had 17 points against Leola/Frederick in the Tiger Den last week.

Ipswich snared a pair of girls' high-school basketball wins last week. One was a 61-22 league win at home vs. Leola/Frederick on Tuesday, Feb. 4, followed by a much closer 48-43 non-league win over Miller on Friday in Miller.

The latter verdict only produced three Ipswich scorers, but when you are led by 35 points from Halle Heinz that could be enough against a lot of opponents on a given night (including Miller). Heinz included six treys. But further IHS scoring tapered off to eight points from Chesney Olivier and five points from Katie Bierman.

The hosts countered with a 13-point scoring...