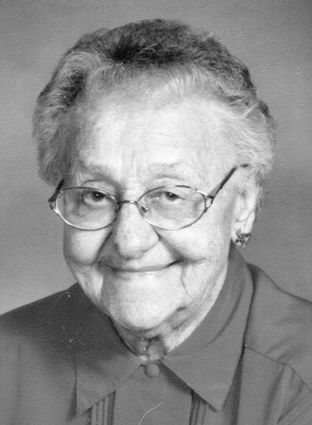 Clara Tschappat, 97, of Aberdeen and formerly of Leola, passed away Sunday, April 26, 2020 at Prairie Heights Healthcare in Aberdeen.

A private family graveside service was held at Green Mound Cemetery in Leola on Saturday, May 2, 2020. A public service may be held at a later date.

Clara was born June 4, 1922 near Long Lake to Edward and Anna Maria (Feickert) Gienger. She attended country school and then continued helping on the family farm.

She married Clifton J. Tschappat on September 10, 1944 at Leola. They made their first home on his parent's farm and took over the operation of the farm in 1952. During this time she raised her family and also worked at the Leola hospital as a cook.

In 1969 the family moved to Leola where she worked as a cook at the local diner and at the school. She also helped her husband operate the city liquor store and was well known seamstress for many in the area. Clara also found time to clean houses. While doing all of this work she never lost sight of her growing family. Her example instilled in them a strong work ethic.

She was currently a member of St. Paul's Lutheran Church in Aberdeen and had been an active member of St. Paul Lutheran Church in Leola where she served for LWML and as the secretary for the local AAL for Lutherans for over 25 years. She also volunteered as the local Thrivent coordinator for four years. In her "retirement" years she and Clifton would drive people to doctor visits and other medical appointments.

Clara was a kind loving woman who enjoyed being a part of her large family. She liked to play cards and was always ready for a good game.

She was preceded in death by her parents; husband; son, David; grandson, Jeremy; daughter-in-law, Diana; four brothers and one sister.

Arrangements by Gramm Funeral Home in Ipswich. Online condolences and memories may be shared with the family at http://www.grammfuneralhome.com .