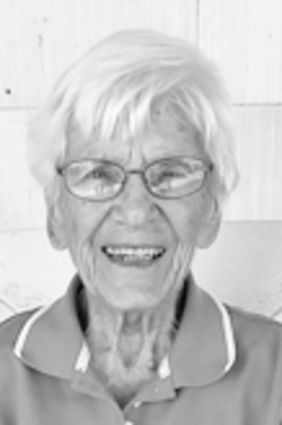 Dorothea Marie Meyer "Dot" was born in Aberdeen, August 26, 1926 to Christian and Gertrude (Weinreis) Morgen. She grew up on a farm near Warner and graduated from Warner High School in 1944. Being extremely adventurous, she traveled with her sister by train to Oregon and worked as a bookkeeper. After returning, she passed the civil service exam and then traveled to Washington DC and worked as a secretary for the Navy Dept. This is where she met the love of her life, Don Meyer, who was in the Army and stationed at Ft. Belvoir, Va. They married in Pomona, Calif. in 1948.

After moving to S.D. in 1949, Dot and Don began their farming career and moved to their current farm in 1952, where she resided until her death.

Through all these years she loved to garden, craft and sew (cooking, not so much). Her faith kept her strong. Some of her lifelong joys included farming, dipping her toes in the ocean during travels, raising her family and then watching her children's families grow. She relished visits from neighbors and having her family gathered together at the farm.

She is preceded in death by Don after 70 years of marriage, her parents, four siblings, two daughters-in-law and one son-in-law.

Schriver's Memorial Mortuary & Crematory, Aberdeen, was in charge of arrangements. Family and friends may sign Dot's online guestbook and view her service via the live stream service link at http://www.schriversmemorial.com.