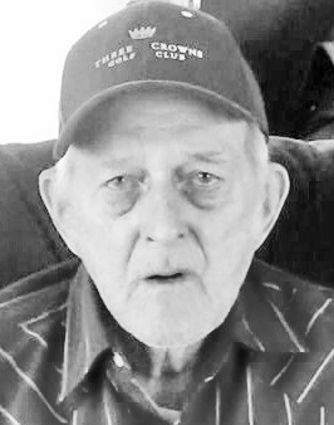 Arvice Manvil Lewis was born on May 27, 1925 in Ipswich, eldest son to parents Abner T. and Ida (Tobiason) Lewis. After completing the 8th grade he went to work on the family farm. Art joined the United States Army January 12, 1945 at Fort Snelling, Minn. He served during World War II. Art spent almost a year and half overseas in the Asian Pacific, Siapan, Quam, Philippines, Iwo Jima before his honorable discharge on December 2, 1946 at Fort Lewis, Washington. He returned to the family farm north of Ipswich.

Art married Norma Lussier on January 23, 1954 in Aberdeen. Together they started a family and ranched north of Ipswich. Art loved farming, ranching, horses, cows, putting up hay which he did into his 90's, In the early 1980's he moved to Peever and started a life with a long time companion Edna Max.

He loved hunting and fishing, He loved kids and grandkids. He'd better like kids he had 11 of them. In Watertown he loved the time he spent with Dave and Evie Zaug. Art always lived his life on his terms. He only had to answer to himself (most of the time) and that's how he liked to live. He loved all his children and grandchildren. He loved spending time with family, playing cards at Char's cafe and Buck's with all his buddies. He had an amazing love for horses and farming. He loved his ice cream. When we would visit him in Watertown, we always had to stop and get him a strawberry shake. He was always there for everyone and offered his hand or shoulder if you needed it.

He took in a lot of kids through the years. Taught us all the meaning of hard work. He was our ROCK.

Art died December 20, 2020 at his care facility in Watertown with his son Douglas Lewis at his side.

Arvice was preceded in death by his parents; one son, Merle Lewis, daughter, Marisa Lewis; two brothers, Donald and Melvin Lewis; and one granddaughter, Ashley Max.

The Cahill Funeral Chapel was in charge of arrangements. For Arvice's obituary and online registry visit http://www.cahillfuneralchapel.com .