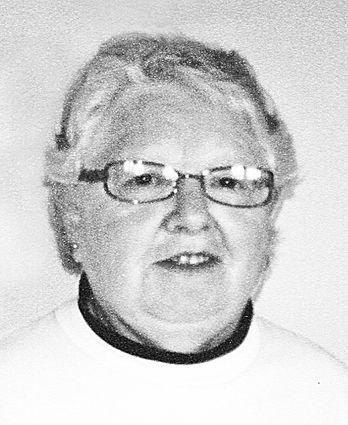 Janice Bernice Malsam, daughter of Catherina (Zacher) and Anton Malsam, was born January 13, 1942 near Hillsview. She was brought up six miles west of Hosmer. She attended country school and Hosmer High School, graduating with the class of 1960. Following her schooling, she operated a café (Jan's Place) and also a ceramic shop in Hosmer. In 1980, she began a 32-year employment as a cook at the Hosmer Senior Citizens home, only retiring when the home closed.

She was a member of Holy Trinity Catholic Church in Hosmer and currently attended St. Thomas Church in Roscoe. Her hobbies included crocheting, cooking, and craftwork. Jan especially cherished time spent with her family.

Casketbearers will be Scott Heyne and Brad Heyne of Roscoe, Greg Heyne of Hosmer, Clint Mertes of Lakeville, Minn., Sean Mertes of Jordan, Minn., and Brandon Lacher of Christine, N.D.

The organist will be Carie Kappes, lector will be Jennifer Heyne, and Mass Servers will be Ashton Heyne and Hope Hoerner.

Services are in care of Lien Funeral Home, Bowdle. Janice's funeral will be livestreamed on the Lien Family Funeral Care Facebook page and be available at http://www.MillerLienFH.com Thursday night.