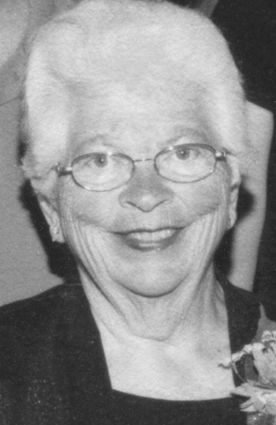 The private family funeral for Gloria "Bonnie" Torrence was held at Gramm Funeral Home in Ipswich on Friday, January 8, 2021. Burial was in the Ipswich City Cemetery.

Bonnie, as she was known by most all, was an awesome cook, fantastic seamstress and an incredible mother and loving housewife. She was Bill's right hand and they were never far apart from each other. They both enjoyed crafts, woodworking, quilting, golfing and painting. The "mighty duo" went out of their way to help their children with "honey dos," completing odds and ends for them on a minutes notice.

Bonnie passed away on Tuesday, January 5, 2021 at Avantara Healthcare in Ipswich.

Surviving Bonnie are her husband of more than 70 years, Bill and her five children, Joan of Ipswich, Jolene (Gary) Bosanko of Ipswich, Jim (Paula) Torrence of Lino Lakes, Minn., June (Mike) Heinz of Ipswich and Jeff (Helen) Torrence of Aberdeen; 10 grandchildren and 8 great-grandchildren. As Bonnie was an only child, she considered her brothers-in-law and sisters-in-law to be her siblings, Pat Torrence, Wes and Gail Torrence, Reva Mae and Donald Carda, Reta and Sylvan Smith, Joe and Linda Torrence and Bev and Gary Smith.

Preceding her in death were her parents, her father-in-law and mother-in-law, Floyd and Dorothy Torrence and brothers-in-law Derald Quentin Torrence, Art Torrence and Arden Torrence.

Due to Covid-19 there was no public visitation or service.

Arrangements by Gramm Funeral Home, Ipswich. Condolences and memories may be shared at grammfuneralhome.com .