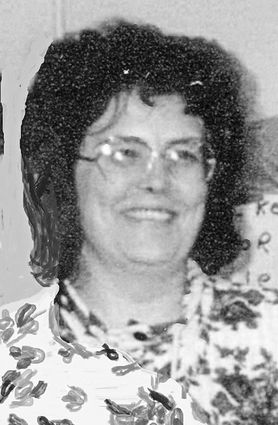 A gathering of family and friends was held on Jan. 23 at Gramm Funeral Home in Ipswich. Graveside Service at Holy Cross Cemetery.

Nada Elizabeth Cox, better known to most as "Lizzie," was born March 7, 1948 at Oakes, N.D. to Albert and Theresia (Zahn) Cox.  She spent her youngest years on a farm near Verona, N.D. and the family then moved to a farm near Lehr, N.D.  She attended high school in Ashley, N.D. before going off to business College in Bismarck, N.D.

Following her schooling she ventured off by herself to Minneapolis, Minn. where she worked for many years in the accounting department of Minnesota Bearing. Her health began to fail and she moved to Ipswich, where she could be near her family.

Lizzie was very adventuresome in life and wasn't afraid of tackling any task. While in Minneapolis she loved when her family would visit so that she could show them the city.  She loved being able to watch her great-nieces and nephews grow up after she moved to Ipswich.  Their near daily visits were the highlight of her later years. She was a devoted fan of Harry Potter, having read every book and seen every movie in the series many times.  She loved the wizardry and had a dragon collection.

Grateful for having shared in her life are her brother, Ellsworth and Elsie Cox of Berlin, N.D.; her sister Eva Gross of Belle Fourche, her sister Lola and Harley Schwind of Mandan, N.D., her sister Ruth and Terry Metzinger of Ipswich, her brother Tom and Kerma Cox of Custer, and many nieces and nephews.

She was preceded in death by her parents; brothers, Avery Douglas and Malon; and her sisters Francis and Monica.

Memories and condolences may be shared with her family at grammfuneralhome.com .