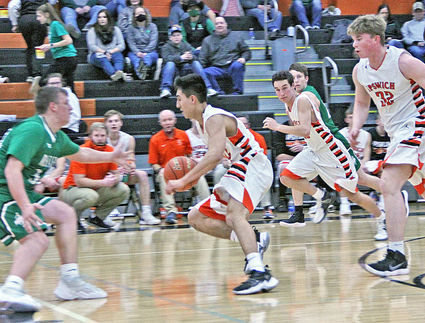 Matt Hettich brings the ball down the court followed by Tigers Dylan Owens and Eric Severson at home against Miller last week.

The Tigers briefly spotted the Rustlers a 4-3 lead, but that would be about the extent of it. That's because the IHS scorers initiated a 10-point run for a 13-4 lead of their own. Taylor Thorson started it with a basket and Ty Kadlec contributed a trey attempt. Josh McQuarie then added a free throw and a layup in two successive possessions, followed by yet another Thorson basket.

Ipswich's first double-figure scoring edge would be 20-9 after a McQuarie basket and...