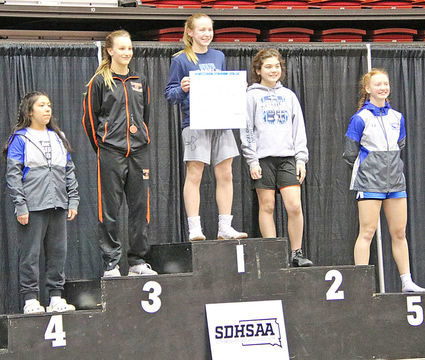 Marley Guthmiller in the third place in the B-129 division at the State B Tourney.

Four boys and a girl competed for Ipswich/Bowdle in the State B Wrestling Tournament on Feb. 25-27 in Rapid City.

Coach Todd Naasz said "I felt that the boys and girl performed very well at the state meet and really represented our schools well. I believe that this experience was a great opportunity for them to learn and added fuel to fire for them to train in the off-season to want to accomplish this goal again."

Marley Guthmiller placed third in the B129 division. Marley defeated Sara Schroder of Canton 4-1 in the third place match.

"Marley had a great tournament. She was the first female we have ever had to participate at the state meet and also place," Naasz said.

Marley beat Jayrn Warejcka of Canton in the first round but was pinned by Reganne Miles of Iroquis-Doland in the next match.

Then Marley was the winner in the consolation match, pinning Cateri Yellowhawk of Sully Buttes.

Lucas Rowland, in B-285, won by fall over Aiden Schoenhard of Mobridge-Pollock in :47. In the quarterfinal Rowland was stopped by Achilles Willuweit of Winner Area with a 10-5 decision. In the consolation round Drake Peed of Elk Point-Jefferson won by decision 8-2. Rowland earned four points.

Tanner Frickson was stopped by Cael Larson of Webster Area with a tech fall 16-1. Then Frickson won by a 7-4 decision over Tyson Durham of St. Thomas More. In the second consolation round Thane Simons of Philip Area won by tech fall 17-0. Frickson earned one point.

Brady Unser was pinned by Dragr Monson of Groton in the first round. In the consolution round Dakota Buck of McCook Central/ Montrose won by decision 6-1.

Kadyn Weisser was pinned by Corbin Schwartz of Redfield Area in the opening round. In the consolation round Tyler Eddy of Wessington Springs/Woonsocket/ Wosley-Wessington won by fall.

"I was very impressed with these individuals' attitudes and effort and the way that they approached the tournament with positivity," Naasz said.

He said this was the most athletes that we had at the state tournament in a while and it was a lot of fun to coach when we had someone on the mat throughout the rounds. "I am very impressed with all of our athletes this season and am excited to see what they can develop into in the future."

All the Ipswich/Bowdle wrestlers at the State B will have a few years to compete. Unser, Frickson, and Rowland are sophomores and Weisser is a freshman. There is only one senior boy graduating from the program - Tyler Tran. Marley, the only girl at this time., is a seventh grader.