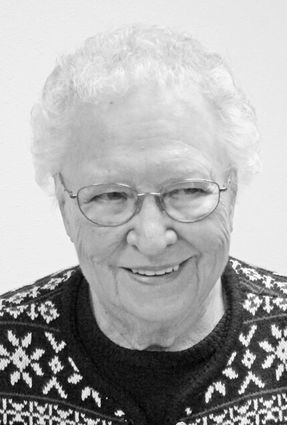 The funeral service for Bernice V. Hettick, 87, of Roscoe, was at 10:30 a.m. Friday, March 5, 2021 at St. Paul Evangelical Lutheran Church in Roscoe. Burial followed the service at Morningside Cemetery at Roscoe.

Bernice Virginia (Winkler) Hettick was born November 29, 1933 on a farm southwest of Roscoe to Theopohil and Emma (Buechler) Winkler. She was called to her Heavenly home on February 28, 2021.

Bernice graduated from Roscoe High School in 1952 and was then employed by Sherf's Super Value. She married Earl Hettick on May 30, 1954. The couple moved around SD while Earl worked road construction. In 1957, the couple moved to a farm south of Roscoe where they lived until 1965 when they moved to a home with a small acreage on the edge of Roscoe. Bernice worked as a clerk and seamstress for Jo-Ann's Apparel until 1969 when she and Earl purchased Roscoe Hardware which they owned and operated until the sale to their son Donald in 1984. She continued to work as a clerk/bookkeeper until her retirement.

Bernice was an active member of several service clubs through the years and was a proud 50+ year member of the American Legion Auxiliary. She was a lifelong member of St. Paul's Lutheran Church in Roscoe where she was baptized as an infant, confirmed and married.

The couple was blessed with five children who learned the values of faith in God and hard work from Bernice's example. Her family is also blessed with memories of family vacations, holiday celebrations and over 50 years of camping trips at the Missouri River which continued until the last couple summers when her health did not allow.

Bernice and Earl enjoyed traveling and visited all 50 states, the District of Columbia and Canada along with several ocean cruises.

Bernice had the greenest of thumbs and each spring for many years following her retirement, you could find her transplanting hundreds of seedlings with a tweezer to their individual pots to be moved and later sold or given away from her greenhouse. She took great pride in her weed free lawn, beautiful flower beds and bountiful garden which she shared with family and friends.

When asked by her granddaughter Janette, Bernice's description of being a good person was "you have to be willing and able to help others if they need help. Do things the way they should be done. Take care of your family and help provide for people if needed, when they are desperate; being fair with people." Bernice fit her description well.

She was preceded in death by her parents Phil and Emma; sister Janell; infant siblings, Janet, Calvin and Norman; brothers and sister-in-law, Melvin and Marge Hettick and Bob Bloemendaal.

Arrangements by Gramm Funeral Home, Ipswich. Condolences and memories may be shared with her family at grammfuneralhome.com .