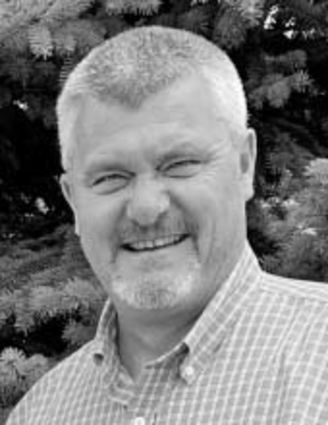 Scott Gerald Green was born July 9, 1971, to Gerald 'Jerry' and Louise (Bauer) Green, in Aberdeen. As a youth, he was active in Y basketball and participated in track in Harrisburg. His nicknames were "Scooter" and "Green Bean". He graduated from Harrisburg High School in 1990. Growing up, he loved celebrating the Fourth of July at his grandparent's farm at Mina, as well as spending time at his grandparent's dairy farm.

In 1993, he met the love of his life, Subrena DeJong, and they married on April 9, 1994, in Tabor. They have two children: Karissa and Tucker. In 1996, they built their first home in Harrisburg. Scott worked for Scott's Lumber in Sioux Falls, until 2010. He owned and operated Fresh Horses Saloon in Harrisburg from 2004 through April 2011. Scott and Subrena and family moved to Mina in 2011 and farmed his grandparents' land until 2014. He then started working at ProBuild, which later became Builder's First Source, and he was promoted to General Manager in January of 2020.

Scott was an active member of Lake Alvin Ducks Unlimited and emceed the annual banquets for the last 25 years. He was also a member of El Riad Shrine Motor Corp in Sioux Falls. Scott volunteered as a firefighter in Harrisburg from 1998 to 2010. He also served as vice-president and president of the Aberdeen Home Builders Association.

Scott loved his family. He enjoyed coaching Karissa's t-ball teams and never missed any of Tucker's basketball games. Subrena's love of flower gardening "grew" on him. You would find him watering her flowers and all the trees they planted this spring. His favorite vacations were riding the side-by-side on trails in the Black Hills with Subrena, family, and friends. He also enjoyed hunting pheasants with his dog, Abby. Scott may have met strangers, but always departed as friends. He enjoyed telling jokes and pulling pranks. His love of building would amaze everyone, building two homes for his beloved family. Scott was always there for his family, friends, and anyone in need. He gave his strength and encouragement to everyone. Scott is our hero, and his legacy will live on as he generously gave of himself as an organ donor so his life will live on in others.

Preceding Scott in death are his grandparents, Merwin and Lorraine Green; grandfather, Albert Bauer; and Scott and Subrena's unborn child.