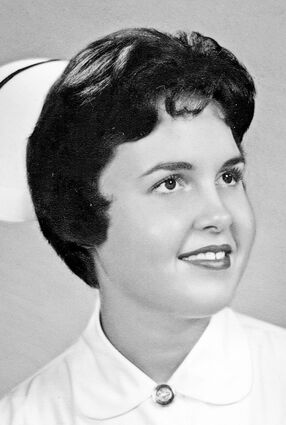 Janice was born on May 21, 1939, in Leola, to Minehart and Edna Petersen. She grew up and attended school in Ipswich.

During her youth, she enjoyed school athletics, swimming, water skiing, and pulling antics and stunts with her seven close girlfriends that were together constantly, and remained friends throughout her life. She excelled in the arts and was honored to be involved in the South Dakota All-State Band.

After graduating high school, Janice, or "Petie," as her friends called her, attended Bennett Nursing School in Yankton. It was here that she married Elroy "Bud" Glanzer on August 6, 1961. They were later blessed with three sons, Mark, Barry, and Christopher.

From 1961 to 1972, Janice worked as the head nurse at Lake Preston, and later at St. Mary's Hospital in Pierre. Janice's loving demeanor and compassionate, genuine concern for others made nursing a natural fit for her.

In 1972, the family moved to Lombard, Ill., where her husband attended chiropractic college.

After the family moved to Idaho Falls in 1975, she devoted herself to supporting her husband's chiropractic career and raising her family. She loved to entertain family and friends who were treated to her amazing cooking. Her potato salad and coleslaw were unmatched.

Janice relived her artistic talent by taking up watercolor painting. Janice attended many art shows and classes and became a very accomplished nature and landscape watercolor artist. Janice had a passionate love of nature and was in awe of God's creations. She was happiest by a river sitting on a rock with her feet in the water, swimming in the ocean, and walking along a beach collecting seashells. Music was also a big part of her life, and she thoroughly enjoyed traveling all over the northwest following her son, Christopher's, drumming career.

In 1996, she and her husband bought a home in Naples, Fla., where her love of the ocean, beach, and painting flourished.

Her later years brought her many health challenges. She inspired many people with her kind, loving nature and courage in the face of adversity. Her strength, when she was weak, came from her faith and trust in her Lord and Savior Jesus Christ.

Janice is preceded in death by her parents, Minehart and Edna Petersen; her son, Christopher; and grandson, David Glanzer.

A memorial service will be held at a later date in Ipswich.