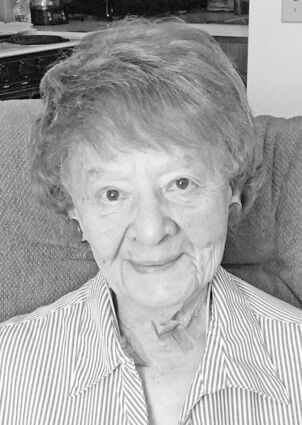 Mass of Christian burial for Dolores Sahli, 91, of Roscoe, is 1 p.m. Thursday, September 30, 2021 at St. Thomas the Apostle Catholic Church in Roscoe. Burial will follow at Morningside Cemetery in Roscoe. Her family requests casual dress.

Visitation is Wednesday from 5-7 p.m. at Gramm Funeral Home in Ipswich and one hour prior to the service at the church on Thursday.

Dolores Himmerich was born on July 5, 1930 to John and Clara (Preszler) Himmerich in rural Roscoe. She lived on the farm built by her paternal grandparents until the age of 12 when her family moved into Roscoe where her father managed the Farmers Grain Elevator. She attended the Sangamon Township School through the sixth grade. Some of her teachers there included Rupert Ulmer, Alma Diegel and Esther Knittel. She continued her education in the Roscoe Public School, graduating from high school in 1948. In September 1948 she went to work at the Roscoe First State Bank where she continued through December 1951.

She married Harold Sahli, son of Kasper and Julia (Gabriel) Sahli on November 22, 1948, in Roscoe where they made their home. They worked in the family grocery store. In January 1952 Harold was called to serve in the Army. His basic training was at Fort Jackson, S.C. just outside Columbia, SC where Dolores joined him. She worked at McCrory's Dept Store during her time there. After basic, Harold was stationed at Fort Richardson, Alaska outside of Anchorage. Dolores also joined him there and worked in the First National Bank of Anchorage until November 1953.

After returning to Roscoe, they bought the family grocery store and ran it until 1987 when their son Bruce took it over. She continued to work there until 1999 when the business was sold.

She was a member of the St. Thomas Catholic Church where she was the church organist for 19 years. She was also a Roscoe American Legion Auxiliary member, a past-member of the St. Thomas Altar Society, Roscoe Commercial Club and the Ivy Garden Club. She enjoyed bowling and golf for many years. In later years she spent many hours playing cards with family and friends.

She especially enjoyed her family, being a fan of their many activities. She spent many hours on her stamp and coin collections. She loved entering sweepstakes, oil painting and most of all, making scrapbooks for her children and grandchildren.

The most precious blessings of her life were the arrival of their son Bruce in 1959 and her daughter Robin in 1961 and of course her many grandchildren and great-grandchildren.

Dolores passed away in the early morning hours of September 26, 2021, at Bowdle Healthcare Center.

Arrangements by Gramm Funeral Home, Ipswich. Memories may be shared at grammfuneralhome.com