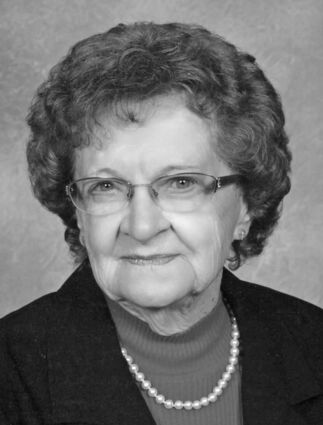 Selma Irene Heyne, daughter of Alita (Grischkowsky) and August Heyne, was born January 26, 1924 at the Heyne farm three miles east of Hosmer. She was brought up on the farm and attended rural school 1½ miles south of the farm. Upon completing her education, she helped care for her siblings and worked on the farm.

Selma married Edwin "Freddie" Mohr at her parent's farm on March 28, 1943. They settled on Freddie's farm 12 miles northeast of Hosmer and in 1977 they moved into Hosmer.

In addition to keeping busy on the farm and with her family, Selma also worked several years at Heier's Meat Market and cooked at the Hosmer School for several more years. Freddie died June 20, 1994. Selma continued living in Hosmer until November 2014 when she relocated to the Bowdle Nursing Home.

She was a faithful member of St. John's Lutheran Church in Hosmer. She enjoyed dancing, listening to music, and embroidering. Selma will be well remembered for how tidy she kept her home.

In addition to Freddie, she was preceded in death by her father, August, on June 1, 1991; her mother, Alita, on September 24, 2002; three sisters (Verna Freemole, Lenora Preszler, and Janice in infancy); one granddaughter, (Ranae Graff); son-in-law (Herbert Graff); and an infant great-granddaughter.

Casketbearers will be Blair Loebs and Julie Loebs of Britton; David Herrboldt of Sioux Falls; Brenda Solberg of Watertown; Roger Preszler of Lincoln, Neb., and Paula Mohr of Nisland.

Vocalists will be the Prairie Harmony Singers and the organist will be Wes Schaible. Ushers will be James Mohr and Delbert Gienger.

Services are in care of Lien Funeral Home, Bowdle. Selma's funeral will be livestreamed on the Lien Family Funeral Care Facebook page and be available Friday night at http://www.MillerLienFH.com.