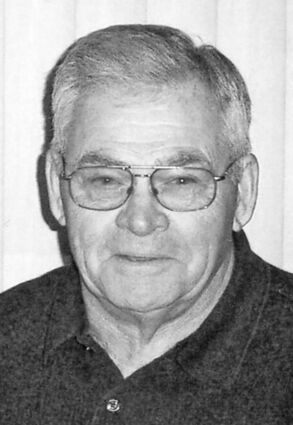 Mass of Christian Burial for Marvin Uhrich, 86, of Roscoe was at 10 a.m. Saturday, Oct. 23, 2021 at St. Thomas the Apostle Catholic Church in Roscoe.  Burial was at Morningside Cemetery in Roscoe.

Marvin was born March 18, 1935, to Joseph and Mary (Daschle) Uhrich in Roscoe.  He was raised on the family farm south of Roscoe and attended country school. He married Lorraine Scherr on June 6, 1955.  They farmed together for 60 years and raised eight children.

Marvin gave back to his community and his church.  He served as an Edmunds County Commissioner for 12 years, served on the Roscoe Volunteer Fire Department, drove school bus for Roscoe Public School for 35 years and played Santa Claus at the school for many years.  He also maintained and mowed the Morningside Cemetery.

His Catholic faith was a priority for him and led him to be a model servant.  He led his family in faithful devotion to Christ and encouraged them to all be servants of the Lord.  He was an active member of St. Thomas the Apostle Catholic Church where he served as a Sacristan, choir member, maintenance man and groundskeeper.  He ushered for countless funerals over the years.

Marvin was a master carpenter and made many memorable pieces for each of his children. He collected model novelty cars and tractors that he had used over his many years of farming.

He cherished the time he could spend with his family.  He especially enjoyed fishing and camping outings with them and playing pinochle and made sure to share his expertise in making red eye whiskey for all family weddings and special gatherings.  He and Lorraine made many friends attending polka festivals in the region.

Marvin was a wonderful husband, father, grandfather and loyal friend who was respected and admired by many.  He was well loved and will be missed by his wife, Lorraine of Roscoe; daughters, Geralyn (Jerome) Malsom of Hosmer, Patricia (Pat) Fuegen of Redfield, Marla (Greg) Henderson of Yankton, and Mary Jo (Tom) Hannasch of Willmar, Minn.; sons, Lenny (LaMae) Uhrich of Roscoe, Jim (Jackie) Uhrich of Aberdeen, Joseph (Judy) Uhrich of Custer and Leon (Audrey) Uhrich of Bismarck, N.D.  He is also survived by one sister, Luella Baus of Maple Valley, Wash. and one brother-in-law, Jerald Adler of Aberdeen, as well as 23 grandchildren and 35 great-grandchildren.

His parents; one sister, Judy; one brother-in-law, Howard; and two grandsons, Paul Henderson and Dominic Hannasch, preceded him in death.

Arrangements are with Gramm Funeral Home of Ipswich. Online obituary at grammfuneralhome.com