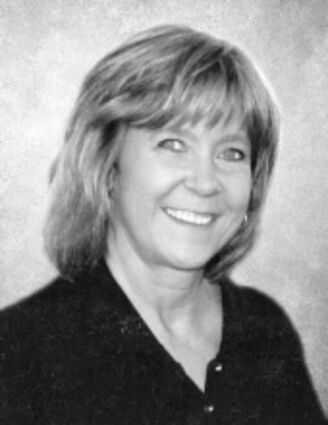 Jean Rounds, 65, died peacefully on Tuesday, November 2, 2021 at her home in Ft. Pierre, surrounded by those she loved.

A Mass of Christian Burial was held at 10 a.m. on Saturday, Nov. 6 at Ss. Peter and Paul Catholic Church in Pierre with private family burial to follow at Mt. Calvary Cemetery in Pierre.

Jean Renae Vedvei was born on October 4, 1956, in Lake Preston, South Dakota, to Alec and Helen Vedvei. The oldest of four siblings, she spent most of her childhood on a farm north of Lake Preston. She initially attended country school near the farm before later going to school in town. She excelled at academics and sports, and was an accomplished musician. Her father especially enjoyed hearing her play the accordion.

After graduating from Lake Preston High School in 1974, she attended South Dakota State University in Brookings. She soon graduated with a degree in office management and went to work at the university. It was at SDSU where she met her future husband, Mike. They were married at the North Preston Church near her hometown on April 22, 1978, and subsequently made their home in Pierre.

The couple had four children: Christopher, Brian, Carrie and John. All were active in sports and extracurricular activities, and Jean loved watching and supporting them in every way possible. She was absolutely committed to their success and documented every minute of it in her amazing scrapbooks.

Jean was an incredible typist-even winning a vacation with her typewriting speed. She used her talents at several positions in state government, including working at the State Planning Bureau and as the office manager for the Secretary of the Department of Transportation.

When Mike decided to run for Governor in 2001, she supported him with two conditions: that he never run a negative ad and never make her give a speech. He followed through on the first condition, and she took on her new role as South Dakota's First Lady in 2003. Over the next eight years, Jean was most proud of her advocacy for childhood literacy and women's heart health as well as her help in designing the new Governor's Residence.

More recently, she was a member of the Catholic Daughters, P.E.O., and the U.S. Senate Spouses' Club. She also served on the Capitol Complex Restoration and Beautification Committee. She enjoyed creative hobbies-especially cross-stitching, quilting, and scrapbooking-with many of her best friends. One of her favorite activities was camping at Okobojo, and she was still waterskiing at the age of 60.

As she battled cancer for the last several years, she would often say, "if you have Faith, you have hope." Her faith and family were her focus. She opened her home every year on Christmas Eve to host more than a hundred close relatives. All four of her children lived close by, and her 10 grandchildren all had the opportunity to get to know their grandma.

She was preceded in death by her grandparents Sam and Andrina Vedvei and Harol "Joe" and Alma McLain; her father- and mother-in-law Don and Joyce Rounds; and her aunts Beverly Gullickson, Signe Anderson, and Joanne Vedvei.

Jean's Funeral can be viewed by visiting: rounds.senate.gov/Jean

Condolences or memorials may be sent to P.O. Box 309, Pierre, SD, 57501. Memorials will be designated to the St. Joseph School Foundation.