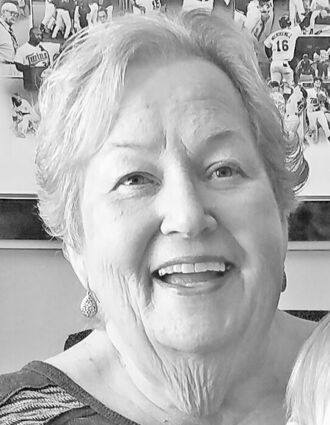 The celebration of life for Judy V. Toennies, 75, of Cresbard, was at 10:30 a.m. on Friday, Nov. 5, at Cresbard United Methodist Church in Cresbard. Burial followed at the Cresbard Cemetery.

Judy was born May 27, 1946 to John C. and Dorothy M. (Vandewerker) Oster at Aberdeen. She attended Simons Elementary, participated in the Girl Scouts where she made lifelong friends and graduated from Aberdeen Central High School in 1964. Judy then attended Presentation College where she earned her degree as an RN in 1967.

She started her nursing career in the surgical department at Avera St. Luke's Hospital and after a year she moved to the Mental Health Unit where she worked until retiring 43 years later. During her years at Avera she served on various committees, was a member of the LAMPS and later a part of the hospital Auxiliary. She and two of her co-workers founded Compassionate Parents, a support group for parents who have lost children and continued the program for 25 years.

During her little spare time in her younger days, she loved to cruise around and made a lot of trips up and down Aberdeen's Main Street. It was while cruising around that she met the love of her life, her Teddy Bear, Merlvin "Bear" Toennies. They were married May 26, 1968. They made their home in Cresbard where she continued to live until June of 2020 when she moved to Primrose Cottages in Aberdeen.

Judy was one to always be on the go in her life but her family always came first. She will be remembered as a wonderful mother and grandmother who created many memories for her family. She cherished her family and attending all of her grandchildren's events from concerts and awards ceremonies to 4H and sporting events. She especially enjoyed baseball and attended Aberdeen Pheasants games in her youth and later as big fan of the Minnesota Twins she attended quite a few games at the Metrodome and Target Field.

She enjoyed many hobbies and interests including going bowling with the girls in Faulkton, sewing, cooking and making homemade doughnuts, mountains of Christmas cookies with her dear friend and neighbor, Vonnie Gabriel. She also loved ceramics, flower gardens, shopping trips, collecting Santa and angel figurines, purses, shoes and jewelry and was a lifelong fan and friend of Sherwin and Pam Linton. She went to nearly every show they performed as long as it was in driving distance.

Even though she was always busy, she still put people first. Judy was a great listener. She made time to listen and visit with friends and family at any time of the day or night. She was always on the phone to exchange laughter and tears or even a simple hello that could turn into an hours long conversation.

Judy still found time to volunteer in her community. She was a member of the Cresbard United Methodist Church, Cresbard Night Owls, Cresbard Centennial Committee, Community Center Planning Committee, Cresbard City Council and had helped to organize many other events in the community.

Judy passed away on Monday, Nov. 1, 2021 at Prairie Heights Healthcare in Aberdeen.

Arrangements with Gramm Funeral Home, Ipswich. Memories and condolences may be shared with her family at grammfuneralhome.com .