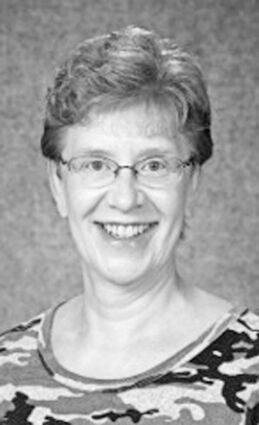 Judy Jean Sykes passed away at her home in Beresford on Saturday January 1, 2022 at the age of 59.

Judy was born in Eureka on June 6, 1962, and grew up on the family farm northwest of Hosmer with her parents and siblings. She attended Hosmer Public School in Hosmer and graduated in 1980. Later she attended College at USD pursuing a Degree in Education.

Judy married Troy Splitt on June 23, 1984. Troy was killed in a construction accident in 1988. She later married David Sykes on January 2, 1997. They made their home east of Vermillion near Spink. Judy and her husband David owned and operated the Antique store located in the Garryowen Church next to their home until David's passing in 2011.

Judy was an active participant at Roseni Lutheran Church where she taught Sunday school and organized Roseni's Christmas programs. She was a very spiritual person.

Judy was a Para-Professional for the Vermillion Public Schools for 20 years and spent most of her time assisting students in the Resource Room under the direction of Mrs. Kelly Stone. Judy worked extra hours assisting families in respite care and providing supervision outside the educational classroom. She helped in the delivery of the weekend food program for students in the Vermillion public school system and rang the bell for The Salvation Army.

Judy was a kind-hearted, gentle, caring and generous soul who always put others first ahead of herself. She will be remembered as having a servant's heart and will be missed by all who knew her.

She is survived by her son, Dylan Dean Sykes; and sisters, Mavis Lehr, Bonnie Mattson (Steve) and Norma Kilber (Kenny); along with many nieces and nephews.

Funeral services were held at 10:30 a.m. Tuesday, January 11, 2022 at Roseni Lutheran Church, rural Beresford. Burial will be at 1 p.m. Wednesday at Zion Lutheran Cemetery in Eureka.