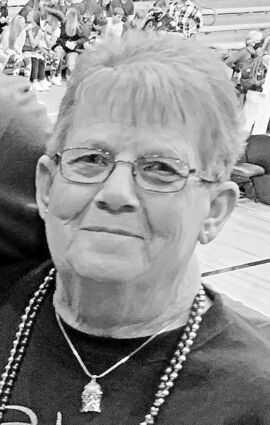 Informal attire or your favorite sports jersey is requested for the service. Face masks are encouraged, but not required.

JoAnn Margaret Reed was born on October 31, 1954 to Joseph and Anneliese (Zupp) Reed in Aberdeen. She was raised in Faulkton. She played clarinet in the high school band and was active with the drill team, graduating with the class of 1972.

On October 12, 1975 she was united in marriage to Conrad 'Skeeter' Miller at St. Thomas the Apostle Catholic Church in Faulkton. Three children were added to this union. The couple settled and raised their family in Ipswich.

JoAnn and Skeeter were both avid sports fans. Whether it was a grandson's soccer match in Rapid City or the little boy down the road's second grade football game in Ipswich, they were there. They supported their grandkids 110% and rarely missed anything they were participating in. They still followed the Ipswich sports teams even 20+ years after their own kids graduated. They were their kids' #1 fans and their grandkids' #1 SUPER fans. If a child was fundraising for school or a sport, JoAnn and Skeeter would always buy two.

JoAnn loved decorating for all holidays, especially Halloween, which was also her birthday. She enjoyed being hostess for family gatherings and holidays. JoAnn liked to stay busy, and multiple times in her life she held up to three or four jobs at one time. Some of her jobs included: waitress, lunch aide at her grandsons' school which she loved because she got to see her grandkids, barmaid, CNA, housekeeper and dispatcher. She was currently working at Ken's Fairway in Ipswich which she loved as she enjoyed being able to see and talk to people every day. Her hobbies included playing cards for hours and hours, reading, dancing with anybody who would be her partner, going to her grandkids activities, and painting ceramics, especially with her granddaughter Jerzey.

She was preceded in death by her parents and husband Skeeter.

Arrangements are with Leonard-Gramm Funeral Home of Ipswich. Condolences and memories may be shared with her family at http://www.leonardfh.com .