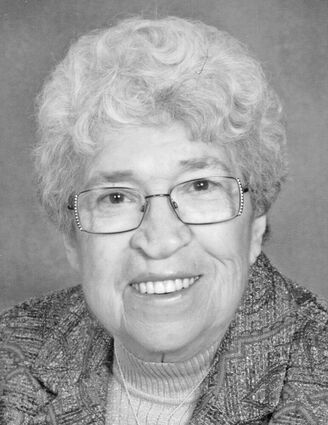 Visitation is 5-7 p.m., Friday, February 11, at the mortuary with a liturgical wake and rosary at 7 p.m. Visitation continues one hour before Mass at the church.

The Burial is at Sunset Memorial Gardens following the service. A time of fellowship and luncheon will follow the burial at the Church Parish Hall.

Elizabeth (Betty) M. (Burgard) Heinz was born on October 21, 1935, to Joseph and Eva (Volk) Burgard. She attended St. Mary's Catholic School from first to ninth grade and graduated from Central High School in 1954. During school, she worked nights and weekends at the Virginia Café and after high school at Artz Camera Supply as a bookkeeper until August of 1959.

On September 10, 1958, Betty married Adam Heinz. They made their home in rural Mina on his parents' farm. Betty was very active in the everyday activities of farming during their 38 years on the farm. From raising nine kids to milking the cows, mowing hay, cooking, gardening, canning, and many more jobs that kept her running. They farmed until 1996 when they moved to Aberdeen. She was employed at St. Luke's Hospital as a cook for 12 years and then the Meals on Wheels coordinator for five and a half years.

Betty was preceded in death by her husband in 2011; one infant daughter; parents; stepmother; two sisters; and five brothers.

In lieu of flowers, make donations to Sacred Heart Catholic Church of Aberdeen.

Schriver's Memorial Mortuary and Crematory, 414 5th Avenue NW, Aberdeen, is in charge of arrangements. Family and friends may sign the online guestbook and also view the service at http://www.schriversmemorial.com.