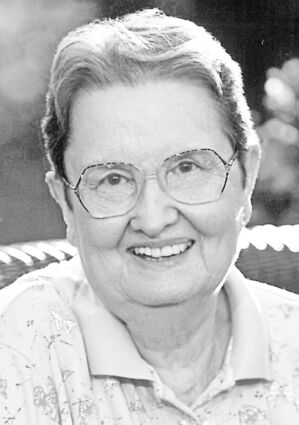 A Celebration of Life Service for Charlotte J. Kost, age 87, of Fairmont, Minn., will be held at a later date on her birthday on June 10, 2022, at First Congregational United Church of Christ in Fairmont.

Inurnment for Charlotte and her husband, Dr. Ronald Kost will take place in Fairview Memorial Park in Fairmont.

Charlotte Jean (Engel) Kost was born on June 10, 1934, in Ipswich.  She was the daughter of Roy and Dorothy (Krucker) Engel.  Charlotte graduated from Ipswich High School.  She attended Cottey College in Nevada, Mo., before moving to Texas with some college friends. She worked as a secretary in the Foshay Tower in Minneapolis as well as working summers in Uvalde, Tex.

While living in Texas, Charlotte met Dr. Ronald Kost, a young optometrist serving with the Air Force. The couple would later marry on April 24, 1958, in Uvalde, Tex. This union was blessed with four children, Katherine, Paul, Jay, and Kari.  After living in Del Rio, Tex., the couple moved to Watertown, and later to Chamberlain.  In 1963, the family moved to Fairmont, Minn., where Dr. Kost continued his optometric practice.

Charlotte was a loving mother and was proud of her homemaker talents.  She was known as an immaculate housekeeper, school volunteer, and was always ready to be of help.  She loved babies and was the first to offer to help with a newborn.  After raising her children, Charlotte enjoyed working at Lily Creek Landing and Georgia's Fashions, both in downtown Fairmont. Along with being Ronald's lifelong, loving caregiver after his stroke, she was also devoted to caring for her mother and Ronald's mother. Before he passed away, Charlotte always cherished visits from her brother, Jim who was known to be a great whistler and jokester as well as her sister, Carol and family from Montana.

Charlotte was an active member of First Congregational United Church of Christ where she served as President of the Women's Association, Church Council, and as funeral chairperson for many years.  She sang in the choir and was a dedicated worker with her generous spirit and willing hands.  Charlotte was also a member of Chapter Y PEO, and served as President as well as in other offices in the chapter.  During her free time, Charlotte enjoyed reading and watching the Twins and other Minnesota sports on TV with Ron.  She most cherished the time she was able to spend with her family and friends.

The family would like to thank the staff at the Lakeview Methodist Health Care Center for their many years of loving care and friendship to Charlotte as well as to Ronald before he passed away.

Memorials are preferred in lieu of flowers to First Congregational United Church of Christ, Lakeview Methodist Health Care Center, or to the donor's choice.

The Lakeview Funeral Home and Cremation Service in Fairmont is assisting the family with arrangements. http://www.lakeviewfuneralhome.net