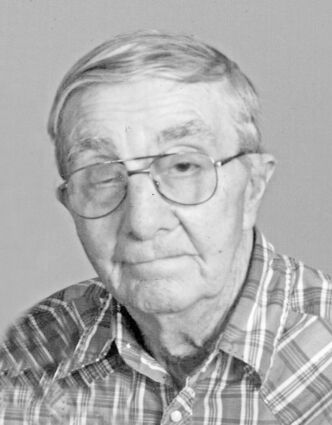 William Charles Johnson, son of Albertina (Cheskey) and Alfine Johnson, was born March 15, 1936 near Bangor. He was brought up near Selby, attended rural school, and eventually earned his G.E.D. Charley, as he was best known, married Rebecca "Becky" Jasper at Pipestone, Minn. on August 22, 1962. Early in his life, Charley was engaged in road construction, working on the Platte-Winner bridge and the interstate highway. In 1966, Charley and Becky moved to Timber Lake where Charley started his truck driving career. His last move was to Hosmer in 1972. He drove truck for Harry Kirschenmann and Aman Cattle Company. He retired in the late 1990's.

Charley was a faithful member of St. John's Lutheran Church in Hosmer. In retirement, he enjoyed woodworking projects and made many treasure chests.

He was preceded in death by his father Alfine, on November 30, 1957; his mother Albertina, on December 16, 1972; two brothers (one in infancy) and four sisters.

Organist was Wes Schaible and ushers were David Eisenbeisz and Delbert Gienger.

Urn bearer was Charley's firstborn grandchild, Merissa Schlepp of Sioux Falls. All of his grandchildren acted as honorary bearers.

Services are in care of Lien Funeral Home, Bowdle. The church service was livestreamed at the Lien Family Funeral Care Facebook page and is available at http://www.MillerLienFH.com.