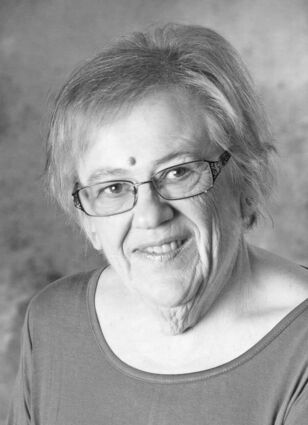 Mass of Christian Burial for Colleen Kay (Allbee) Fischer, 67, Roscoe, will be at 10:30 a.m. on Friday, May 20, 2022 at the Catholic Church of St. Thomas the Apostle in Roscoe. Father Timothy Smith will be the Celebrant.

Interment will be at 1:15 p.m. Friday, in the Holy Cross Catholic Church Cemetery in Ipswich under direction of Leonard-Gramm Funeral Home of Ipswich.

Visitation will be Thursday, May 19, 2022 from 5 to 7 p.m. at the Catholic Church of St. Thomas the Apostle in Roscoe with the Rosary beginning at 7 p.m.

Colleen Kay Allbee was born August 15, 1954 to Clyde and Marcella (Hammrich) Allbee at Ipswich. She attended Loyalton School up to eighth grade and then graduated from Roscoe High School. She attended Stewart School of Hair in Aberdeen. While there she met Mike Fischer.

She married Michael Fischer on June 16, 1973, at Onaka and they made their home in Aberdeen. She worked at the Wylie Park Zoo for a bit. She also worked many jobs until moving to Loyalton. She then worked at the Ipswich Nursing home for a bit. Then the family moved to Hosmer, where Colleen worked for the Edmunds Central School System as a custodian at the Hosmer site. In 1996 the family moved to Roscoe where she and Mike started Fischer Repair and she worked as the secretary. In 2003 she worked as a mail carrier for 12 years. She finished her career out as the bookkeeper of Fischer Repair until her death.

Colleen enjoyed baking for her grandchildren and customers. She loved to visit with everyone and being together as family. She also enjoyed camping, and fishing and growing her flowers.

She was preceded in death by her husband Michael Fischer, one son Shannon Fischer, parents Clyde and Marcella Allbee, and one grandchild Annabelle Fischer.

Arrangements by Leonard-Gramm Funeral Home, Ipswich. Condolences and memories may be shared with her family at http://www.leonardfh.com.