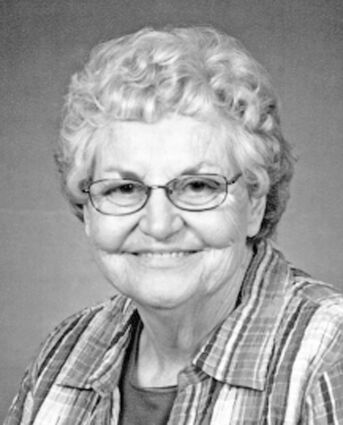 Mass of Christian Burial was at 10:30 a.m., Monday, May 23, 2022, at St. Mary's Catholic Church, Aberdeen. A time of fellowship and luncheon followed Mass at the church hall.

The burial was at 2 p.m., Monday, at Holy Trinity Cemetery, Hosmer.

Adeline Elizabeth Heier was born on April 11, 1934, on a farm three miles west of Hosmer, to Joe J. and Frances (Hoerner) Heier. She grew up in the area and attended rural school till the eighth grade. Adeline worked on the family farm helping with her mother's huge vegetable garden and flower garden.

Adeline was married to Henry "Hank" Malsam at Holy Trinity Catholic Church in Hosmer on October 29, 1952. She was a member of Holy Trinity Parish as well as the Christian Mothers of Holy Trinity. She was a hardworking housewife and farmwife. To this union, five children were born along with five boys who died in infancy. They farmed the Malsam family homestead for six years. Adeline and Hank then moved to a farm 2½ miles southwest of Hosmer. In 1968, they built a new farm 1½ miles southwest of Hosmer due to major storm damage.

Adeline enjoyed cooking and baking for her family; Sunday chicken noodle soup was a specialty of hers. Hank passed away in August of 1990 and Adeline continued to make the farm her home.

In 2004, Adeline moved to Aberdeen and became a member of St. Mary's Catholic Church. She enjoyed helping at many events. Adeline befriended several ladies during her tenure of Eucharistic Adoration at Avera St. Luke's Hospital chapel. This resulted in Thursday morning coffee time afterward. Adeline's faith and family were the epitome of her life. Some of her favorites were watching Wheel of Fortune, Mother Angelica, and the Minnesota Twins baseball games.

Schriver's Memorial Mortuary and Crematory, Aberdeen, is in charge of arrangements. Family and friends may sign the online guestbook and also view the service at http://www.schriversmemorial.com.