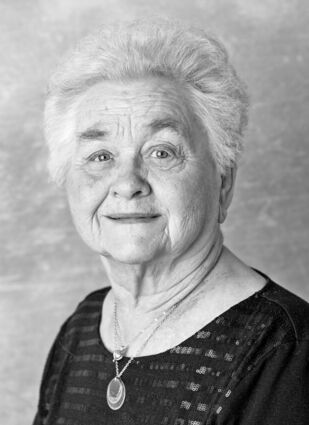 Ardella Jung, daughter of Katharina (Heyne) and Jacob Jung, was born southeast of Hosmer on June 12, 1932. Shortly after her birth the family relocated to her Jung grandparent's farm four miles northeast of Hosmer. Ardella's formal education was received at Cleveland Township #4 Rural School.

She married Roy Klein at her parent's farm on July 24, 1951. They first settled on Roy's homeplace 16 miles southeast of Eureka. In 1954, they moved into Eureka. Ardella took a job at the Red Owl Grocery Store in 1959. She left the job market following the birth of her second daughter in 1961. In 1967, she returned to work at the grocery store and retired in 1994.

She was later hired by the Eureka Kuchen Factory to make Strudels and Cheese Buttons using her own recipe.

Roy died September 3, 2009 and Ardella lived the rest of her life in Eureka. She was a member of the Eureka Reformed Church and the Ladies' Aide. She enjoyed playing bridge and was a big baseball fan, especially of the New York Yankees.

September 2018 her physical health declined and she became a resident of the Eureka Healthcare Center.

Funeral services were 10:30 a.m., Tuesday, May 24, 2022 at the Eureka Reformed Church led by Pastor James Grossmann. Interment followed at the Eureka Cemetery.

Musicians were Bonnie Mehlhaff, granddaughter Melissa and great-grandsons, Joshua and Joseph. The usher was Earl Mehlhaff.

Honorary bearers were the caring staff at the Avera Eureka Healthcare Center.

Casketbearers were grandson, Jonathan; great-grandsons, Joshua, Joseph, and James; as well as Thomas Flemmer and John Kolar of Eureka, Brian Jung of Aberdeen, and Rodney Kirschenmann of Hosmer.

Services are in care of Lien-Straub Funeral Chapel, Eureka. Ardella's funeral will be livestreamed at the Lien Family Funeral Care Facebook page and be available Thursday night at http://www.MillerLienFH.com.