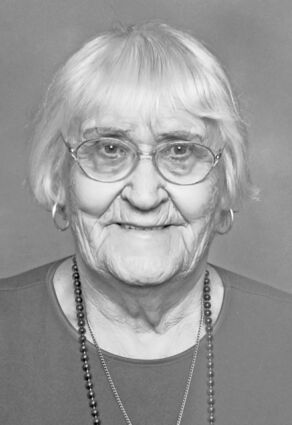 Mass of Christian Burial for Pauline Draskovic, 102, Ipswich, will be at 10:30 a.m., Thursday, May 26, 2022 at Holy Cross Catholic Church, Ipswich. Father Timothy Smith will serve as Celebrant. Burial will follow at St. Bonaventure Cemetery in McIntosh.

Pauline passed away on Friday, May 20, 2022 at her residence in Ipswich.

Pauline Agnes Kahl was born on February 2, 1920 to Philip and Margaret (Schwalich) Kahl on the family homestead in the southeast part of Grant County in North Dakota and that is where she grew up and attended country school through the eighth grade. She started high school but decided to go to work instead, doing housework, babysitting and then at a hospital.

On October 14, 1941 she married John Draskovic.  They lived nine miles southeast of McIntosh where they farmed and raised cattle.  They lived at three different places until they retired and moved to the Senior Housing at Ipswich in 1995. John passed away on April 23, 2000 and she continued to live at Ipswich.  From September 2020 to the time of her death she made her home with her daughter Norma Jean and son-in-law Eugene Hammrich.

Pauline was a hard working farm wife and homemaker. Her family was important to her. She was a wonderful cook and baker and a talented seamstress.

Pauline was active in her church at McIntosh.  After moving to Ipswich she became a member of the Holy Cross Catholic Church where she served as a Rosary leader and was both an active and auxiliary member of the Legion of Mary.  She was a devout Catholic with a special devotion to the Most Holy Rosary and Chaplet of Divine Mercy.

Surviving her to celebrate her life are her children, Norma Jean (Eugene) Hammrich of Ipswich, Margaret (Meg) Morse of Wenatchee, Wash. and Ivan (Dorothy) Draskovic of McIntosh; 16 grandchildren and many great and great-great grandchildren.

Leonard-Gramm Funeral Home is honored to serve the Draskovic family. Condolences and memories may be shared with her family at http://www.leonardfh.com.