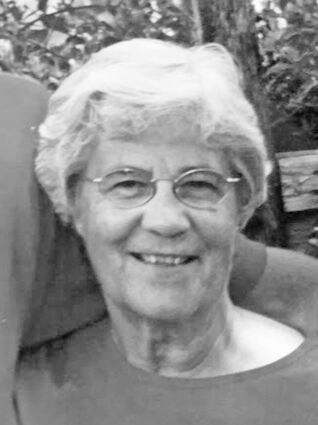 The Memorial Service for Ferne Crissman, 89, Ipswich will be at 1 p.m. on Saturday, June 4, 2022, at First Baptist Church, Ipswich. Pastor Dan Kuno will officiate. A private family inurnment will follow at Ipswich Southside Cemetery.

Ferne passed away peacefully on Monday, April 11, 2022, at the home of her son David Crissman in Mina.

Olive Ferne Hartzell Crissman was born on Halloween, October 31, 1932 to Helen Jeanette Humiston Hartzell and Hilbert Harrison Hartzell (Pood) at Powell. She was the seventh in their large family of eventually eight children. The children were Harrison, Robert, Dorothy, Richard, Warren, Elizabeth, Olive Ferne, and Gayle.

Ferne and her siblings grew up first on a farm southeast of Ipswich and later on Homewood just east of Ipswich. They had no TV, cell phone, and not many games. They had a radio that ran on batteries. Their telephone hung on the wall, and they were on a party line. They had very few books and that is why Ferne became a bookworm once she grew up.

One hot summer day, on the old farm, a car stopped at the house. It was Howard Samp. Howard invited the Hartzell kids to Bible School at First Baptist Church. After that Helen and the kids attended Sunday School and church at First Baptist and became members. Ferne was a lifelong member at FBC in Ipswich.

Ferne started to work for Mrs. Perisho when she was about 12. Ferne did housework, mostly cleaning and dishes. Eventually, she typed papers for Mrs. Perisho, working for her all the years Ferne was in school. Mrs. Perisho sent Ferne to Camp Judson one summer. It was the old Camp Judson located under Pactola Reservoir now. Mrs. Perisho paid half of the registration and Ferne paid half from her earnings. The camp was very rustic, no heat, no running water, no glass windows, just screens and it was cold at night. Ferne asked Christ into her life that week and was baptized on Halloween night.

Ferne met Earle Crissman at a joint meeting of the Baptist and Congregational youth groups, and they dated during high school. Earle was two years older, so he went on to college, but Ferne was busy finishing high school and all the activities that went with school. Ferne graduated in 1950. They dated throughout Ferne's final two years, writing letters and seeing each on weekends or vacations.

Toward the end of the school year Ferne wrote Earle a letter saying she wasn't going back to Ipswich. She got a letter from Earle telling her she should think it over before making a decision. Then Earle called and offered to pay Ferne's way back! Then Earle said he would come and get Ferne! Ferne's Mom (Helen) said she wouldn't tell Ferne what to do but if Ferne wanted to go back to Ipswich, she'd buy Ferne a bus ticket back. Ferne had never ridden the bus on a cross country trip and never alone. Ferne wrote Earle a postcard telling him to meet the bus in Aberdeen and at what time. She mailed it just before she got on the bus in California. Back in those days there was a large bus station at the southwest corner of Sixth Ave. and Main St. in Aberdeen. Ferne got off the bus at the bus station and Earle wasn't here to meet the bus. Ferne telephoned the drug store. Earle answered and asked where she was. He had not gotten the postcard! (It came the next day).

Ferne got a job in Aberdeen and shared an apartment with some other girls through the summer. As fall was approaching and they were wrestling with their future, Earle solved the problem by proposing. Earle and Ferne were married Sept. 8, 1951, at Earle's parents' home. They lived in married student housing (a little trailer) in Fargo for a year while Earle was attending NDAC (NDSU) and finishing his pharmacy degree. They were married 65 years and held special celebrations on the 50th and 60th anniversaries.

Earle and Ferne had five children – Mona (Ron) Gleysteen, Jerry, David (Cherie), and twin girls, Jody (Brian) Bolinske and Judy (Jack) Waldman. The family lived in Ipswich and attended the First Baptist Church. They had a busy life with Earle working in the drugstore on Main Street and Ferne taking care of the children. During the fall, winter, and spring, they were involved in school and church activities. The family took lots of summer vacations and especially to Camp Judson. They spent most afternoons and evenings at Mina Lake during the hot months. Earle and Ferne did get some traveling in after the children were out of the house. They traveled with Starburgs to Israel and on many other adventures (Alaska, Idaho, Texas, Montana). They moved to the home they built on Mina Lake during their retirement years until Earle's health forced them to move back to Ipswich.

Ferne went to Presentation College for a nursing degree when Jody and Judy were done with high school. She worked briefly at the Ipswich Hospital but then her mother needed full time care. When her mother passed on, Earle's mother needed assistance and Ferne took on the job. Finally, in 2013 when Earle was incapacitated, Ferne became his primary care giver until Earle died in 2016.

Ferne had a beautiful soprano voice and enjoyed singing in the choir and playing the piano. She was quite "crafty" and enjoyed various projects especially when entertaining the grandchildren. She was a voracious reader, especially Christian Bible study material and the Bible. Ferne was a Christian and would like all of her family to know how important Jesus was to her.

Ferne is survived by her gang which includes her five children and spouses; 15 grandchildren and 10 spouses; 32 great-grandchildren, her sisters, Gayle and Betty; one sister-in-law, Marian Crissman Gilbert; and many nieces and nephews.