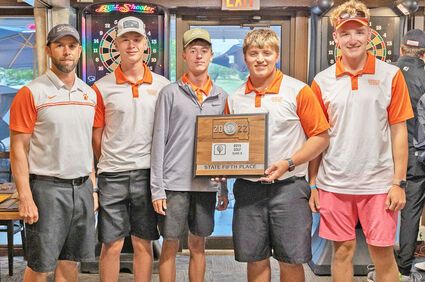 The Ipswich boys golf team was tied for fifth place after the State B was played June 6 and 7 in Rapid City.

The tournament was plagued with inclement weather during the tourney played at the Elks Golf Course in Rapid City.

Gregory won the boys division with Garretson second. There was a three-way tie for fifth, with Ipswich, Faulkton and Chester Area tied.

Ipswich's Luke Peterson tied for 11th with Ashton Olivier of Chester Area. Chet Peterson was one of five golfers tied for 14th place.

Other IHS golf team members at the event were Jace Konsor and Tucker Kadlec. Matt Pollock is their c...