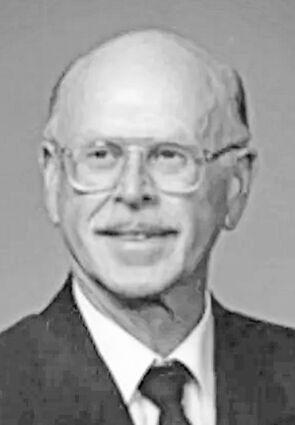 The memorial service for Nelvin Robuck, 91, of Aberdeen, was at 7 p.m., Thursday, June 23, 2022, at Spitzer-Miller Funeral Home, Aberdeen, with Pastor Mike Waldrop officiating.

Inurnment will be at Union Cemetery, Flandreau, at a later date.

Nelvin was born August 18,1930 to William and Lea Robuck. He graduated from school in Bowdle. He went on to Northern State for his teaching degree. He taught at a country school near Bowdle and then Seneca. (The family has heard many stories of him trudging thru the snow to get to school and how easy we have it nowadays). Nelvin later changed careers and became a salesman for Watkins CO. and later Standard Chemical Feed Co.

Nelvin met and married Mary Lou Schlepp in 1953 and they produced four children: sons Michael, David, Ron and daughter Nancy. He raised his family in Flandreau. Mary Lou passed away in 1980 and Nelvin was widowed for 17 years until he met Mary Roberts (yes, another Mary) who was a blessing to the family with her loving and caring personality. They were married for 26 years until his passing.

Nelvin had many interests in life. He was President of the Isaak Walton League for several years and volunteered his time with Kinship youth program. He loved music and self-taught himself to play guitar, organ, keyboards and violin. He never could read music but could play anything by ear. He loved to take his family camping and later Motor Homed with his second wife Mary for 10 years, meeting many wonderful people on their travels. Later in life Nelvin became a Chaplain and worked at Manor Care Nursing Home. He had a gift for helping the sick and weak. Quote "Some people are so afraid to die that they never begin to live." Nelvin had a big personality, an infectious smile and lived life to the fullest. He will be greatly missed.