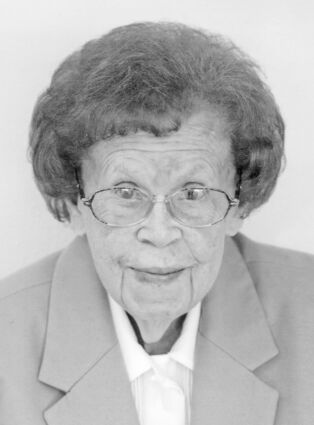 The Funeral Service for Violet 'Vi' Sauer, 95, Roscoe, will be held on Thursday, June 30, 2022, at 11 a.m., at St. Thomas Church in Roscoe with Father Timothy Smith officiating. Burial will follow at Morningside Cemetery in Roscoe.

Violet passed away peacefully in her sleep on Monday, June 27, 2022, at the Bowdle Nursing Home, Bowdle.

Violet Lenora Voegele was born on October 16, 1926, on a farm near Onaka to Bernard and Katherine (Bashans) Voegele. She was the oldest of six children and grew up helping her parents with farm work. She started milking cows at the age of six. In 1940, they moved to a farm northeast of Roscoe.

Violet was united in marriage to LeRoy Robert Sauer on November 19, 1950. Shortly after they were married, they worked for a farmer and lived in the Tolstoy area. Almost a year after their marriage, LeRoy was drafted into the United States Marines, and spent their first anniversary in boot camp. After boot camp, he came back to Roscoe to get Vi and they drove to Tustin, California where they were stationed. While LeRoy was busy with his Marine duties, Vi did babysitting for some of their friends they made there. When LeRoy was discharged from the Marines in 1953, they moved to a farm two miles south and 1½ miles west of Roscoe where they raised assorted grains, alfalfa, hay and both dairy and stock cows. Vi spent lots of time helping with milking chores and helping LeRoy with the field work. In 1967 LeRoy and Vi bought a farm one mile east of that farm, and in 1994, they turned that farm over to their son and moved to a house in Roscoe.

Vi enjoyed hosting holiday meals cooking, baking, gardening and canning. She even canned tomatoes in 2021. Some of her special dishes were Halloopsie and Rosettes, but ask anyone who ate at her house; anything she cooked tasted delicious. Vi was also quite crafty and enjoyed making different beaded crafts, making latch hook rugs and embroidering dish towels. All of her grandchildren have a latch hook rug from Grandma that will be a treasured keepsake for each of them. Vi and LeRoy also enjoyed going to dances in their younger days, and played different card games with neighbors, friends and visiting relatives. Vi and LeRoy played cards with each other every night before Vi broke her arm and entered the Bowdle Nursing Home this past spring. Vi also enjoyed their many "snowbird" trips to Texas and Arizona. Vi was a very compassionate person. She spent countless hours at the bedside of her father and father-in-law during the last days of their lives.

She was preceded in death by her parents Bernard and Katherine Voegele; brothers, Clarence, Edward, Edwin and Lloyd Voegele; sister Vivian Rohrbach; and grandson Samuel Sauer.

Arrangements by Leonard-Gramm Funeral Home, Ipswich. Condolences and memories may be shared with her family at http://www.leonardfh.com .