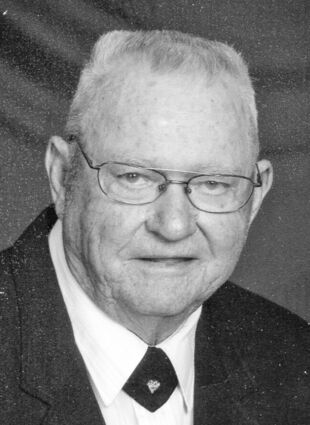 Roy Joseph Heintzman, son of Margaret (Heier) and Frank Heintzman, was born February 14, 1923 in the southeast corner of Edmunds County, eight miles north of Onaka. His dad died in 1929 and the family relocated to Onaka. On June 8, 1932, Margaret married Joe Binfet and the family settled six miles northeast of Onaka in Edmunds County. Roy attended Hillside Township Rural School and then worked on the farm. He also worked on threshing crews and was involved in the Civilian Conservation Corps (CCC).

Roy married Phil Stappler at St. John the Baptist Catholic Church in Onaka on September 30, 1947. They settled on the family farm that they purchased six miles northeast of Onaka. This is where Roy lived the rest of his life.

Roy was a member of St. John the Baptist Catholic Church in Onaka. Although Roy was a farmer through and through, he enjoyed traveling extensively with Phil and friends, visiting with people, and playing cards with friends. His memory was amazing, and he loved sharing his memories of years gone by. After his wife, Phil, passed away one and a half years ago, he continued living in his home by himself. Several months ago, he adopted his beloved little dog, Stormy. She was dedicated to him and was a constant companion. Mainly, though, Roy loved and cherished his family. They were the most important people in his life.

He was preceded in death by his wife, Phil, on December 27, 2020 (following 73 years of marriage); his parents, Frank and Margaret; his stepfather, Joe; two sisters, Mary Heiszler and Clemie Vetch; two brothers, John and Pete; two grandchildren, April Lunders and Adam Lunders; one half brother, Leonard Binfet; and numerous step siblings.

Roy's funeral was livestreamed at the Lien Family Funeral Care Facebook page and is available at http://www.MillerLienFH.com.

Services are in care of Lien Funeral Home, Bowdle.