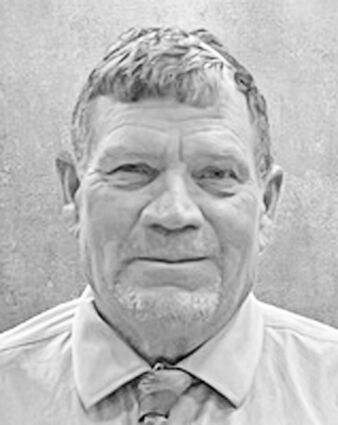 Funeral service will be 10:30 a.m., Thursday, November 17, 2022, at Our Savior Lutheran Church, Faulkton, with Pastor LeShea Avery presiding.  Burial will follow in the Cresbard Cemetery. A prayer service will be 7 p.m., Wednesday, November 16, 2022, at the church with visitation one-hour prior.  Mark Wayne Toennies was born July 9, 1955, in Aberdeen to Loren and Lucille (Spanier) Toennies. He grew up on a farm three miles north of Cresbard. He attended Cresbard elementary and high school with his three brothers, Jerry (Judy) Toennies of Cresbard, Gene (Sylvia Salwei) Toennies of Cresbard, Dean Toennies (deceased), and one sister, Lorie (David) Miller, Sioux Falls.

Shortly after high school, Mark married Susan Haberling and together they had three children, Justin Wayne (Jamie) Toennies of Rapid City, April (Michael) Sorensen of Faulkton, and Tyler (Sidney) Toennies of Summerset. Mark and Susan lived in Walden, Colo. where Mark worked as a ranch hand and mastered riding horses and roping cattle. When April was one year old, they moved back to the farm in Cresbard. Mark loved working on the farm and had a natural talent for sheering sheep. Mark spent many years mastering this trade alongside his best friends Jerry Toennies, Tom Cowels, Roy and Paul Wilkins, and Jeff Bryant. Mark was known for being one of the best and fastest in the trade and was often called upon for final 4-H touches.

He was involved in 4-H from a very young age. Unfortunately, his dust and hay allergies did not cooperate and in 1984, he took a job with AAL Insurance and moved to Eureka. While in Eureka, he also took a part-time job with Fischer Plumbing & Heating and shortly after, it became his full-time work. Mark was a community-minded individual and during his time in Eureka, he served several terms on the City Council, Zion Lutheran Church Council, and was an active member of the Jaycees.

Mark met his true love Kelly (Huffman) in 1997 after being set up by friends on a blind date. They fell in love and were married on September 6, 1997. Through this marriage, he gained two children, Samantha (Nick) Kallas of Leola, and Justin Michael (Lacey) Toennies of Aberdeen. He officially adopted Sam and Justin in 2001, however, he considered them his children from the start.

In Leola, he was a member of the Volunteer Fire Department, a certified ambulance driver, served on St James Lutheran Church Council, and was a school board member for several terms.

In 2011, Mark and Kelly relocated to Faulkton where Mark continued plumbing while also working as the maintenance manager for Faulkton Senior Living. In 2016, Mark was hired as the Emergency Manager for Faulk County. He retired from the Emergency Manager position in 2021 but kept an active role helping in any way that he could. He was on the South Dakota I-mat team and could be called at a moment's notice to assist with a disaster anywhere in the state. Mark was highly respected across the state for his dedication to this job. He was dedicated to making Faulk Co. as safe as he possibly could for everyone that lived here.

During his time in Faulkton, Mark was a volunteer fireman, served on the City Council, and was a member of the Our Savior Lutheran Church Council.

Mark had a love for the outdoors, and anything sports related. Hunting was a lifelong passion and over the years, he got to share this with his two German shorthair dogs, Memphis and Belle. He was an active member of the Lakeside Country Club and golfed league regularly. He was a member of a local bowling team and enjoyed cheering on the Denver Broncos. Mark enjoyed attending his kids' and grandkids' sporting events. In his youth, he served as a coach for the Cresbard Baseball team and could often be found as a volunteer official on any court or field.

Mark loved camping and fishing and in 2019, bought a cabin at the West-Whitlock Resort that overlooked the bay. He loved his time at the river and in the summers would spend every available minute there. He often commented that the river was his favorite place, but it was always better with family. He had grand plans of retiring there in a few short years.

Mark loved his family more than words can express and was extremely proud of his children and grandchildren. Most recently, the family had a chance to celebrate his and Kelly's 25th wedding anniversary in a surprise fashion at his favorite place. He must have known something was up because a few days prior he had taken the time to write a speech where he detailed how proud he was of every family member.

Mark had a God-given gift of conversation and made friends wherever he went. If you braved a conversation with him, you knew you only had to listen. His heart was soft, but his head was hard. He was a stubborn man, but stubborn in a good way. He stood up for what he believed in and never made you question his values. He was a true patriot and cherished anything with an American Flag or Bald Eagle.

Mark's memory will be cherished by his wife Kelly, his siblings, children, grandchildren, and extended family and friends. Mark was welcomed into his eternal home by his parents Loren and Lucille, his brother Dean, his father-in-law Joseph R. Huffman, Sr., his niece Amy Toennies, his nephew Levi Wiedebush, his grandson Everett Kallas, and many aunts, uncles and grandparents that passed before him.

The family would like to express our deepest appreciation for the support we received after Mark's sudden passing. A special thank-you to Judy, Jerry, Trevor, and Brett Toennies, the Cresbard Firemen, and the Faulkton Ambulance crew who rushed to Mark's aid. Thank you to the FAMC medical team, Pastor LeShea, and all the family and friends who arrived at the Emergency Room to offer comfort. Your love and kindness will never be forgotten.

Luce Funeral Home of Faulkton has been entrusted with Mark's arrangements. (www.familyfuneralhome.net)