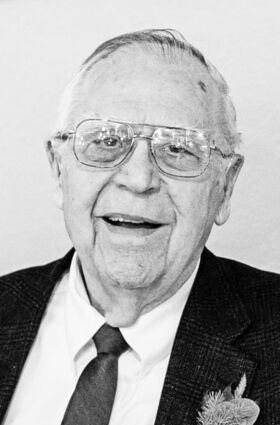 Visitation will be 6-8 p.m. at Schriver (Gramm) Funeral Home in Ipswich on Thursday with the Rosary starting at 7:30 p.m.

Benny was born on January 15, 1930, to Andrew and Katherine (Wolfe) Thares in Ipswich. He was a lifelong member of the Holy Cross Catholic Church, serving as a Forester for many years.

Benny's passions in life were his wife, his children and grandchildren, his friends, the Kansas City Chiefs and Royals, and his career...in that order. He married the love of his life, Deloris Geditz, in 1960 after establishing himself as a successful grain buyer in Ipswich, and together they raised four children.

The grain elevator business was all Benny ever knew, having started in it at the age of 12, helping his father at the Beebe Elevator (eight miles west of Ipswich) during the summers. At 15, he dropped out of high school to work full-time at the elevator to help support the family when his father was injured. He later graduated from Ipswich High School in 1949. But the grain buying bug stuck and Benny went back to work for a couple of local elevators and then he and his brother, Louie, bought the Beebe Elevator in 1958. That began the Thares Bros (Brothers) Elevator business that lasted until 1976 when they sold the elevator to the local farmers cooperative.

At the request of Vince Jensen, manager of the Farmers Elevator (later North Central), Benny continued his passion of buying and selling grain to customers that quickly became friends, and he and Vince developed a life-long friendship. Benny's reputation as a fair, honest, and loyal businessman lasted throughout his career. Even now, many people talk about how they wouldn't have been able to continue farming had Thares Bros Elevator not extended credit to them or helped them in other ways during a difficult time. People speak of his kindness and respect that he had for everyone. It wasn't uncommon for the phone to ring at home well after hours when someone needed Benny to reopen the elevator so they could dump one more load of grain, buy animal health products, or in cold winters provide a load of coal for a family that was running low. He never hesitated for a moment to head straight to the elevator to provide whatever service was needed.

And it wasn't just adults that liked Benny. Just about every kid in Ipswich knew he had a stash of suckers, usually Tootsie Pops, in his office that he would gladly and regularly hand out when kids visited the elevator with their parents.

His four children loved to visit him at the elevator, too, because they not only knew where the sucker stash was kept but could usually coax him out of a dime for a bottle of Coke or for some "burnt" peanuts. But the best part of visiting the elevator was the opportunity to go to the storage room where the seed and feed bags were stored. Oh, what fun it was to "jump" on the bags from one stack to another. Sometimes during spring planting or harvest time, the kids had to go to the elevator to see their dad because he was working late, helping farmers get the seed they needed to plant or staying open late so all the grain trucks could be emptied.

In 1999, Benny celebrated 50 years in the grain elevator business with a celebration of many current and former customers attending. In 2003, he left the "Thares Bros. Elevator" location and moved to North Central's Farm Store where he sold animal health products and seed. In 2008, after being told by North Central it was time to retire, Benny immediately began working for Tri-County Ag, located one mile east of Ipswich. There he helped Rich Lacher and Dean Mehlhaff run their Pioneer Seed dealership and custom spraying operations. Rich and Dean became fast friends with Benny; friendships that remained strong until his passing. He enjoyed working with Dean and was responsible for filling the plane with water and giving Dean a "thumbs up" when it was clear for him to take off. He was also proud to work with Rich, who was the Pioneer Seed dealer, a position that he encouraged Pioneer to give Rich a few years earlier.

At the age of 85, Benny suffered a severe brain injury and finally had to stop working. But he never lost his passion for agriculture and would always check the markets and often call his youngest daughter, who lived in Kansas, to find out how that state's winter wheat crop was looking.

Benny's pride and joy was his family. He was called Grandpa by five kids who adored him, and he was looking forward to meeting his first great grandchild in early March 2023. He loved having his own special time with the grandkids, often taking them for ice cream (his motto was "there's always room for ice cream!") or to Perkins for breakfast. If one of them wanted to earn money for something special, he would ask them to go get his wallet and would proceed to hand them a $20 bill. When asked what "chore" the grandchild did to earn the money he would answer with "I asked him/her to go get my wallet. That's a chore!" And he always followed it with a sly grin and a big smile shared with that grandchild. He taught most of them how to drive, always making sure they visited a DQ for a cone during one of their driving lessons.

Benny loved to play cards and there are many stories of him and Deloris playing pinochle or whist with another couple until the wee hours of the morning. There was always plenty of laughter and teasing during those evenings. In his later years, he loved going to the casino with his brothers and anyone else who wanted to go along. He had an uncanny knack for outsmarting the slot machines, always playing the quarter slots and walking out with WAY more money than he went in with. It was rare that Benny ever lost money in the casinos. But it was never about winning money to him. It was about spending time with his family and enjoying the laughter that always came from those outings.

Benny loved to travel and was always up for a vacation, especially if someone else was driving or making the arrangements. His favorite place to visit was Hawaii, namely Kona, where even though he wasn't a swimmer, he would watch his children and grandchildren enjoy the ocean and he could take in the beauty of the islands. It seemed that no matter where they traveled, Benny would always run into someone he knew. One of the most unique places this occurred was at the Pearl Harbor Memorial where he ran into his cousin.

Benny loved to listen to music with his favorite being when any of his children played the piano or would sing or play in school concerts or the church choir. He would sit in his recliner in the living room and fall asleep listening. If they stopped, and he wasn't quite done with his nap, he would beg them to continue. He had a strong appreciation for all types of music, including Mario Lanza, being his favorite tenor, and just about anything sung by Anne Murray. But he wasn't picky and just about anything with a good message or melody would suffice. He would sing loudly in church, even though he often said, "I can't carry a tune in a bushel basket."

In lieu of flowers, the family asks for donations to the Spinal Cord Society (c/o Mike Janssen, 2785 104th Court East, Inver Grove Heights, MN 55077) or the Kansas City chapter of the National Multiple Sclerosis Society (2020 W. 89th Street Suite 100, Leawood, KS 66206) as he never stopped praying for a cure for his daughter's paralysis and his grandson's disease. Or donate to the charity of your choice.