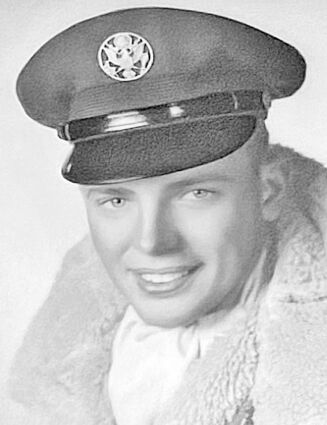 Abner Thomas Lewis, Jr., 90, of Ipswich, passed away under Hospice Care, on Tuesday, December 20, with his daughter by his side, after a long, hard, courageous battle with cancer.

A Funeral Service will be 10:30 a.m., Wednesday, December 28, 2022, at United Church of Christ, Ipswich, with Pastor Tim Fugman and Pastor Gary Compton.

Burial will be at the Ipswich City Cemetery with Military Honors. A time of fellowship and luncheon will follow the burial at the church hall.

Visitation will be one hour before the service at the church.

Abner Thomas Lewis, Jr. was born on November 17, 1932, to Abner Thomas and Ida (Tobiason) Lewis in Ipswich. Abner, known to most as Junior, attended school in a one-room country schoolhouse southeast of Ipswich on the Craven Road.  After completing the eighth grade, he started high school in Ipswich, but catching rides didn't work out well, so he decided to stay home and help on the family farm, later on working in Aberdeen.

After the Korean War broke out, he enlisted in the Air Force at the suggestion of his older brother, Don, already in the Army.  After training, (also earning his GED) he was assigned as a tail gunner on a B29 bomber, and later, boom operator on a B29 mid-air refueling tanker. Junior's time in the Air Force saw him stationed on bases in Colorado, Alaska, Texas, at Turner AFB in Georgia, and on the Island of Guam.

On April 3, 1953, while stationed in Georgia, Abner married Ruth Helen Blunt, also of rural Ipswich, in the parsonage of a Baptist pastor in Albany. After an honorable discharge, they moved back to South Dakota, living in Ipswich and Aberdeen during the winters. For nearly ten years, Junior worked road construction for Harris Construction and Knight Construction, working on many projects throughout the Dakotas, Montana, Wyoming, and Colorado, including portions of interstates in and around Sioux Falls and Denver. During these times, they lived in a true mobile home, pulling it from job site to job site with their car. He also worked for Oban Construction, with Virgil, and again later, in his 70's, for Gene.

In 1964, they started farming in Union Township, not far from where he grew up. On that farm, they raised cattle, wheat, barley, rye, oats, alfalfa, and corn for silage (and pheasant hunting, of course), sweet corn, sunflowers, sometimes horses, and their two kids, Sharon and Tom. Ruth had grown up on a farm in Rosette Township, north of Ipswich, and they started farming that land as well, calling it The Bread and Butter Field. They farmed together until Ruth's sad, untimely death on December 29, 1982.

In the 1970s, Junior and several local men got their private pilot's licenses, together buying a Cessna 172 single-engine plane and forming the Ipswich Flying Club. Junior was also active in the Ipswich United Church of Christ, singing in the choir and serving on Council, the Ipswich Lions Club, a lifetime member of The American Legion, serving as Post Commander and Sergeant at Arms, and was a lifetime member of 40 & 8.  Junior was also a partner in Lewis and Lewis Construction, in Rock Springs, Wyoming.  He often liked to say he flew a load of lions to Wall (for a State Lions Club meeting).

Junior married Ricky Gauer on March 24, 1984, at Holy Cross Catholic Church in Ipswich. They enjoyed life fully, golfing, traveling quite often for work, pleasure, or commitments either of them may have had, and visiting all their kids, friends, and family. Sadly, Ricky became ill in June of '89 and passed on April 12, 1990, and has been greatly missed.

Junior was married for a short time to Carla Vitense, and although the marriage didn't survive, they remained friends.

He continued to fish and golf and, in the winters, would spend many hours making his own lures, often checking out the bracelets and earrings of his family members to see if anything would add that perfect touch to catch that perfect fish. As his grandsons got older, he traveled to many footballs, baseball, and soccer games, church programs, school concerts, wrestling matches and honor choirs, and more hunting and fishing.

In November, family and friends gathered at the Elks Lodge to celebrate his 90 years. He said he didn't want a party, but he enjoyed it immensely, not wanting it to end.