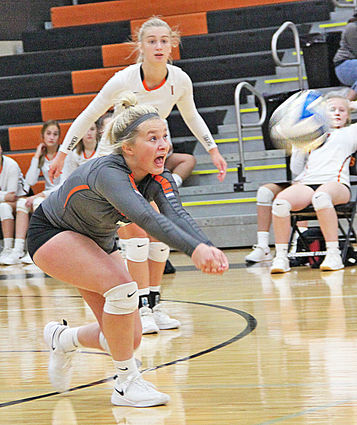 Chesney Olivier in action in the Ipswich Subway Invitational on Saturday

Another home match was to have been played here on September 22 hosting Potter County but that game has been postponed due to an outbreak of covid-19 in Potter County. But the game is now scheduled for Oct. 1 at home.

And Tiger fans can still hopefully watch their team at home on Sept. 24 vs. Langford Area and then again on Sept. 28 hosting North Central. (And both of those are league games.)

Meanwhile, Ipswich's final win actually proved to be the Subway championship game won by Ipswich over Aberdeen Christian in best of three sets format. A Paige Mehlberg block kill turned out to be the match winning point 25-14 after the Tigers had won the first set 25-16 on a AC hitting error. Both teams were indeed undefeated in the tourney, entering that game.

In the first match vs. Leola/Frederick Ipswich had gotten off to an early 5-1 lead in their opening set, but had to stave off the Titans 25-21. And the set winner there had also been delivered via a Mehlberg kill. The second set (and the match) was won 25-17 after a Titan hitting error. Ipswich's second match of the day was another straight-sets affair, won by the Tigers 25-17 and a considerably easier second-set 25-12 victory over the Lemmon Cowgirls, thanks to a Mehlberg block kill.

Langford Area proved to be even more formidable in the Tigers' third match of the day. The Tigers held on for a 25-20 win of the first set and an even closer 25-21 edge in the second set, courtesy of a Katie Bierman kill for the match point.

There was one solo block from Mehlberg, who also featured four assists. Katie Bierman added three assists. Ipswich had 45 digs led by Chesney Olivier with 18 and Tarynn Kleffman with 11.

In its second match, Ipswich collected 30 kills among its 57 hits, led by Mehlberg, 9 of 11 with eight kills, Grabowska 12-12,6 and Halie Feldman 7-8,4. The Tigers were aided by 64 accurate sets that included 27 assists. Heinz distributed 27 of them with eight assists and Pitz went 29-29 with 13 assists. At the line Ipswich finished 46-48 with six aces, led by Kleffman, 10-11, three aces and Grabowska 7-9,2. Ipswich had one solo block from Mehlberg who also assisted Katie Bierman on a blocking effort. Ipswich had 45 digs, paced by Chesney Olivier with 20 and Grabowska with 10.

Then versus Langford, Ipswich utilized a 45-56 hitting effort with 20 kills. Mehlberg was 8-9 at the net with six kills, Grabowska 7-10,5 and Feldman 8-11,3. At the line Ipswich ended up 44-46 with six aces. Kleffman was 9-10 with three aces and Ashton Loken 3-3,2. Ipswich obtained 51 sets in as many tries and included 19 assists. Pitz dished out 28 setting attempts with 11 assists and Heinz finished 18-18,7. Ipswich was able to come away with five solo block attempts and three assisted, led by Mehlberg, three solos and two assists and Feldman, one of each. Ipswich recorded 36 digs led by Chesney Olivier with 18 and Grabowska with five.

Defensively Ipswich featured two solo blocks and three assisted blocks, led by Mehlberg, two solos and one assist and Feldman, two blocking assists. The Tigers came up with 38 team digs, led by Chesney Olivier with 16 and Grabowska with five. Fites collected 10 digs for AC, followed by Joy Rohrbach with eight.