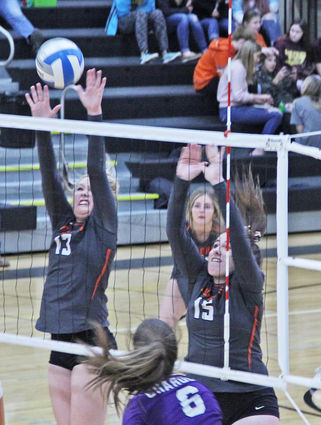 Halie Feldman (13) and Kate Geditz (15) in action at the net in the Region 2B Tournament.

The Ipswich netters, seeded second only to Faulkton in this year's Region 2B rankings, celebrated another 2B bracket championship last Thursday, thanks to a straight-set 3-0 win over Highmore-Harrold, seeded third overall. Two nights earlier the Tiger girls had carved out a similar straight-sets victory over seventh-seeded Sully Buttes.

Ipswich coach Trent Osborne was impressed with Ipswich's consistency. "I thought everyone played very steady both nights," he explained. "We were able to win the serve/pass battle in both matches, which kept the other teams on their heels in a lot of the ral...