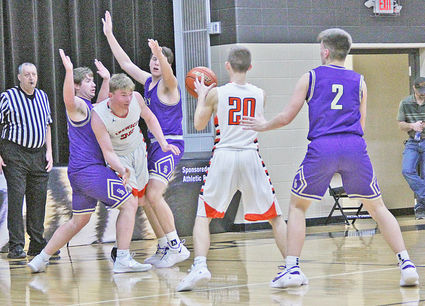 Matt Jaenisch (20) looks to pass the basketball to Eric Severson during the Tigers game at home vs. Sully Buttes last week.

Basketball outcomes can sometimes feature lengthy runs by both teams and that was certainly the case during the Ipswich boys' 56-53 non-conference victory over Sully Buttes last Tuesday in the Tiger Den. The Tigers indeed held on for that three -point one-possession win, shaved in half from six points by a Chargers' trey with about four seconds left.

The Tigers had put together a seemingly insurmountable 50-33 edge with a nine-point run started by a Carson Gohl layup to close out the third quarter with Ipswich up by 10, 43-33. Matt Hettich added a basket to open fourth-quarter scoring and T...