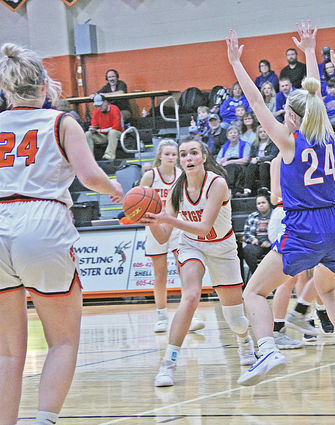 Hailey Bierman (10) looks to pass the ball in basketball action in Ipswich last week against Warner.

The Ipswich girls came away with a 46-36 win over LRC rival Warner here last Tuesday. The girls' largest lead would turn out to be 16 before the visitors would stage a mini rally to close within 10.

Believe it or not the Monarchs' only lead in the entire game would be their opening basket. That's because the Tiger girls staged an 11-point

run, started with a Halle Heinz trey, followed by her break-away lay-up and then two straight Bailey Pitz treys. So the Tigers would indeed lead 11-2 before a Warner response.