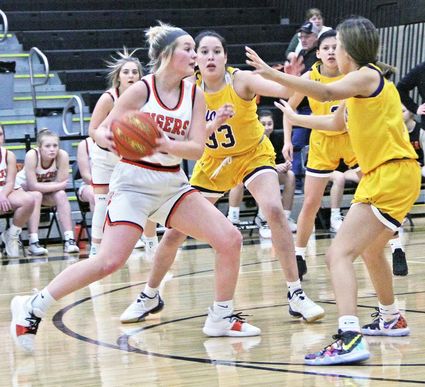 Chesney Olivier in basketball action in the Tiger Den.

Ipswich dropped a 65-55 non-conference girls' high school basketball outcome to the Lower Brule Sioux last Thursday in the Tiger Den. (Lower Bule is a member of Region 2B, along with Ipswich and that evening's girls' action launched a girls/boys doubleheader that was ultimately swept by the Sioux.)

But Ipswich's girls would hang around within striking distance for much of the game, because the visitors' largest lead would by 13 points, 21-8 early in the second quarter. They had jumped out to a 14-6 lead after a quarter and would go up 28-19 at the half, despite a Halle Heinz trey that close...