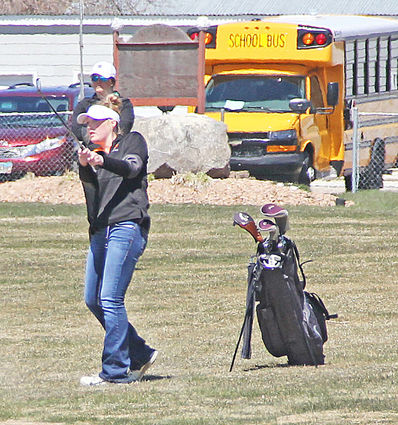 The Tiger boys won their team division, topping second-place Faulkton 256 to 269. There were six scoring teams on the boys' side.

Luke Peterson keyed the victory with his 72, toppping Bennett Cassens of Faulkton, the runner-up with an 81.

Ipswich added a pair of additional Top-Ten boys results - Chet Peterson at eighth at 87 and Matthew Jaenisch's ninth-place 88. Next was Jace Konsor at 26th at 112. Trevor Larson rounded out the IHS effort with his 31st-place 122.

The girls from Ipswich were able to compete as a team here and placed fourth among seven teams. (Jayce Pugh of Miller won it at 87, as did her team.) Ipswich was led by Halie Feldman's runner-up 92. Ashton Loken was 12th at 109, followed by Tarynn Kleffman's 126 for 21st.

Ipswich had attended a high school golf meet in Miller on April 22.

The Tigers' top effort came from Luke Peterson in fourth with his 83. (James Valley Christian's Ryan Stahl carded a 76 for first-place honors that day.) Ipswich's Jace Alberts also fired a 107 for 21st, Tucker Kadlec a 116 for 27th and Trevor Larson a 130 for 29th.

But Ipswich didn't have any girls that attended the Miller event. (It was won by the host's Jayce Pugh with her 89.)

The Tiger golfers are scheduled to compete in the Faulkton Invite on Thursday and then in the Bowdle Invite on Saturday. The golfers will travel to Aberdeen on Monday in a Aberdeen Christian event.