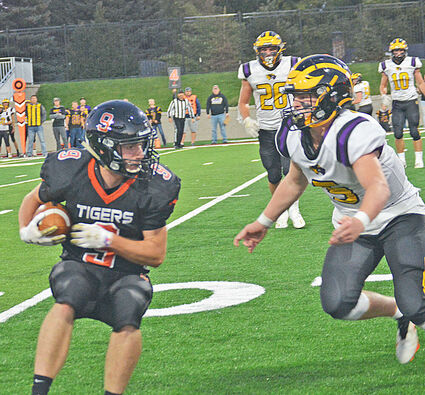 Trevor Beyers (9) pulled down a pass, but a Wolverine defender has his eye on him.

Check out the Photo Gallery for more photos of the Tigers' game in Aberdeen.

Ipswich found itself in an unaccustomed position in a high school showdown of two unbeaten football teams last Friday at Northern's new stadium. Trailing early instead of leading, the Tigers did an admirable job of battling back before eventually dropping a 46-28 decision to powerful Herreid/Selby Area.

Turnovers can be a determining factor in an otherwise close game and that certainly would be true Friday evening.

The Wolverines didn't really get their first three-possession lead until late in the game and the reserves from both teams would then finish out the contest. The HSA contingent had taken advantage of a Tiger fumble early in the contest and turned that drive into a nine-yard score plus the PAT play for an 8-0 lead. An interception would put the Wolverines back in business, resulting in a drive that would be capped by a short TD carry and another successful PAT conversion for a 16-0 HSA edge. (Brenden Begeman and Trey Sayler would carry for their respective touchdowns.)

But Ipswich retaliated with two straight second-quarter scoring drives which would definitely keep the Tigers in the game. Ian Beyers passed for the touchdowns, one to his brother Trevor of 16 yards and the other to his cousin Ty Kadlec that covered 26 yards. The first PAT play failed, but Ian Beyers kept for the second conversion, still leaving the Tigers down 16-14. And HSA got into the end zone late in the half, thanks to a two-yard carry by Begeman and added their PAT play for a 24-14 edge at intermission.

But the Tigers' D would do what it needed to do in the entire third quarter, keeping the Wolverines off the scoreboard in that stanza. Meanwhile, Ipswich would narrow its deficit to two points, 24-22 on a Carson Gohl TD run of three yards, plus the all-important conversion run by Luke Peterson.

The final quarter would then tell the story! Chance Gregg got a 18-yard TD run for the Wolverines with a successful conversion play. But guess what! Tyler Hettich would electrify the fans in the new stadium with a 77-yard TD kick return. But the Wolverines didn't panic and put together a lengthy time consuming scoring drive, capped by guess who Begeman with a two-yard carry to paydirt. He later tacked on that insurance touchdown, a 24-yard TD scamper.

Herreid/Selby Area rolled up 333 rushing yards, led by Begeman's 229 on 33 carries. They were 8-13-1 through the air for 126 more yards from Tray Hettick. Begeman would be their leading receiver with three catches for 78 yards.

Ipswich unofficially totaled 74 rushing yards, led by Gohl at 13-41, Ian Beyers 9-28 and Luke Peterson 6-16. Ian Beyers went 8-15-2 through the air for 113 yards and Kadlec would become his leading receiver with four catches for 69 yards, followed by Trevor Beyers at 4-29 and Matthew Jaenisch at 2-15.

The Tigers had 68 tackles vs. HSA. Luke Peterson had 14 and Hettich and Zach Geditz, 10 each.

The Tigers will next turn their attention to a crucial LRC league match-up at Faulkton on Friday, Oct. 1.