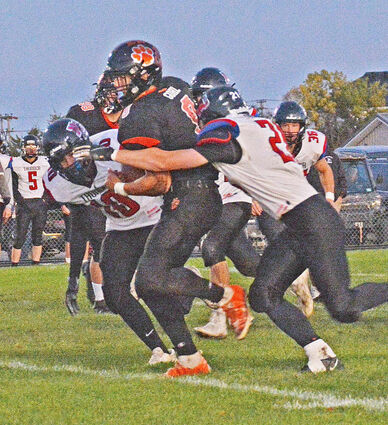 Carson Gohl (8) takes off for the endzone. NC defenders work to slow him down.

The lights will be on for at least one more night at the Ipswich football field, when the Tigers, 7-1 during the regular season will host Lemmon/McIntosh (4-4) in a Class 9AA high school football playoff opener on Thursday at 7 p.m. Ipswich comes in as the overall third seed in the state. Hanson is the number one seed and Parkston seeded second.

The Tigers tuned up for the post-season with a Lake Region Conference 54-0 win over visiting North Central in a game that was ended in the third quarter on the 50-point-lead rule. Those last six points were derived by Ipswich's defense when Trevor B...