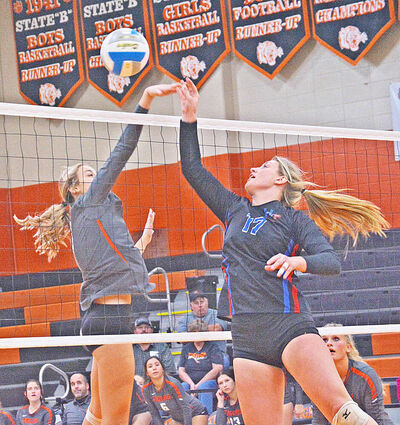 Gracie Lange battles at the net with a H-T player in the Tiger Den last week.

Ipswich participated in Tuesday and Thursday high school volleyball action last week - one match away from home and the other in the Tiger Den. Unfortunately they were both setbacks. That road match would be a clash of the Tigers, won by the Mobridge-Pollock Tigers last Tuesday in Mobridge -25-21, 25-14, 28-26. Then Ipswich sustained a 3-1 loss to Hitchcock-Tulare two nights later.

There were obviously some bright spots in both matches. A highlight of the Thursday match was that Ipswich had lost its opener 25-22, but regrouped for a 25-17 win of the second set. (That set point was scored by...