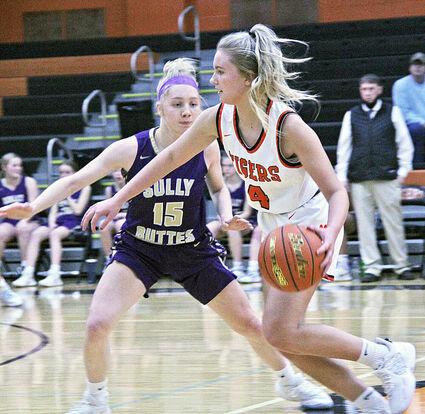 Kaitlyn Bierman (4) brings the ball down the court in the Tigers' homecourt game last week against Sully Buttes.

It was a non-conference clash, but both schools are indeed Region 2B members.

The Tigers and Chargers had traded baskets early in the game, where the score was tied five different times, the last time being 10-10. But that was when the visiting team exploded for a 22-10 first-quarter ending scoring advantage. (Ipswich's final lead had been a rebound put back by Kaylin Onken for a brief 10-8 edge.)

The Chargers didn't let up their attack too much during the second quarter, despite a...