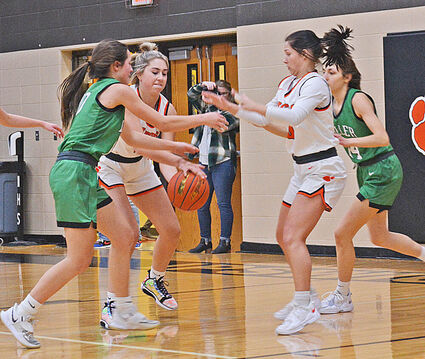 Tigers Baylee Kulesa, left, and Karlie Gohl join the rebound battle in the girls' game vs. Miller in Ipswich.

Ipswich was defeated by a Region 2B girls' varsity basketball opponent Miller Area by a 46-19 verdict on February 3 in the Tiger Den. This game was indeed hosted by Ipswich instead of Miller due to that Miller School fire.

The Tigers were at least able to hang around vs. Miller throughout the first half of the game. That's because there was a lot of defense by both teams that evening, especially during that first half. The Rustlers would spot Ipswich an early 4-0 lead before they would finally get on the board with a 10-0 run the rest of that quarter. That put the visitors ahead 10-4. And M...