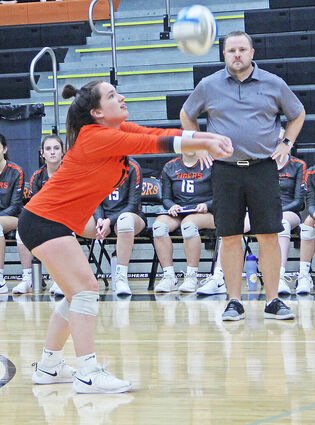 Libero Madison Geditz in volleyball action in the Subway Tournament on Saturday.

Ipswich placed fourth in its own Subway volleyball invite last Saturday in the Tiger Den.

But the Tigers then dropped a straight-sets match to Kimball-White Lake, the eventual champion, 25-22 and 25-16, sending them into the third-place match. They lost to Herreid/Selby Area 25-18 and 26-24 to get fourth place.

Versus Langford Ipswich was led by Baylee Kulesa in attacking the net, going 12 of 13 with eight kills. Gracie Lange finished...